Momen sees off Mehboo­b to give Africa­ns best-of-five series­
By Our Correspondent
Published: April 8, 2016
Tweet Email 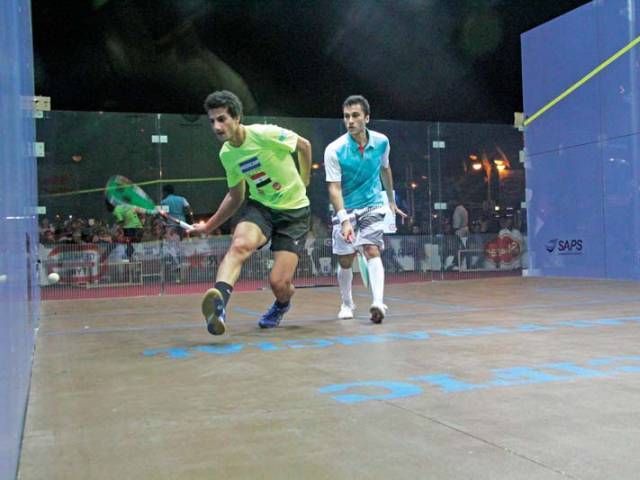 Despite Pakistani players’ best efforts, they could not get the better of their Egyptian counterparts, whose superior fitness paid dividends in “Legends versus Champions” series. PHOTO COURTESY: PSF

KARACHI: Egypt clinched the Legends versus Champions series 3-1 as Tarek Momen defeated Pakistan’s Farhan Mehboob 3-2 yesterday to seal the victory at the PAF Museum in Karachi.

The Egyptians headed into the clash leading the five-match series 2-1 as Pakistan’s hopes of remaining alive in the series rested on Mehboob’s shoulders.

The stylish Pakistani left-hander gave the home side some hope as he took the first frame 13-11, but Momen soon levelled the tie at 1-1.

Mehboob again took the lead by winning the third frame but the Egyptian then took over, with his superior fitness proving the difference the longer the game went on. The world number 10 Momen won the next two frames 11-4 and 11-5 against a tiring Mehboob to claim the match as well as the championship.

Farag, who is ranked 11 in the world rankings, showed his superiority as he bagged the victory in just 25 minutes with a scoreline of 11-6, 11-5 and 11-2 against Asim, who currently ranked well below at 147.

The second match saw Pakistan’s Shahjehan Khan stun Mazen Hisham in a marathon five-setter which went on for a staggering 71 minutes.