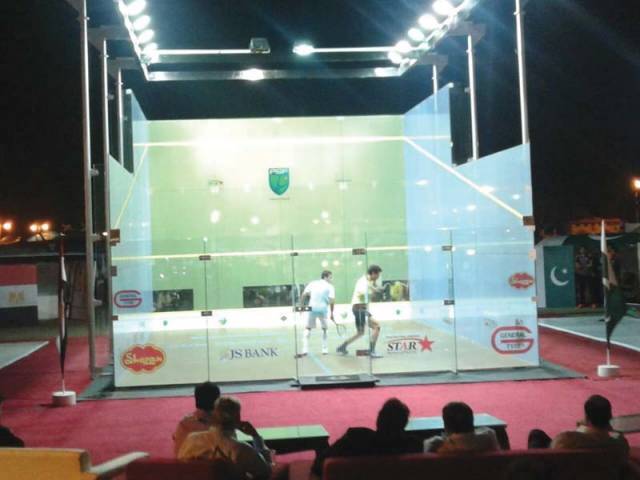 The glass courts, a state-of-the-art facility which allows the court to be set up anywhere, are being used in the Legends v Champions series — the first time such a facility is being used in Pakistan. PHOTO COURTESY: PSF

KARACHI: Highly-rated youngster Asim Khan did not enjoy his day as he lost to Egypt’s Ali Farag 3-0 in the Legends v Champions squash series which commenced at the PAF Museum yesterday.

The Legends v Champions series pits Pakistani squash players with their Egyptian counterparts. There will be five one-on-one matches between the Pakistani and Egyptians players with each match carrying a winning purse of $8,000.

Farag, who is ranked 11th in the world, showed his superiority as he bagged the victory in just 25 minutes with a scoreline of 11-6, 11-5 and 11-2 against Asim, who is currently ranked 147th in the world.

Pakistan Squash Federation Secretary Amir Nawaz, while talking to The Express Tribune, revealed how the event is aimed at reviving the sport in the country.

“This is a historic series between two great squash countries and I’m sure that this will certainly help the revival of squash in Pakistan,” said Nawaz.

He further added that this event would also encourage other countries to visit Pakistan.

“When this event concludes successfully, I’m sure that we’ll get even bigger tournaments in Pakistan and foreign players would like to come and play here,” he added. “Pakistan has such a rich history that it deserves to be at the top again and this is why the PSF has been making continuous efforts to improve the game.”

From $20 to $20 million, Pacquiao’s journey to final payday