Review: ‘Maalik’ shines through the scratches

Review: ‘Maalik’ shines through the scratches 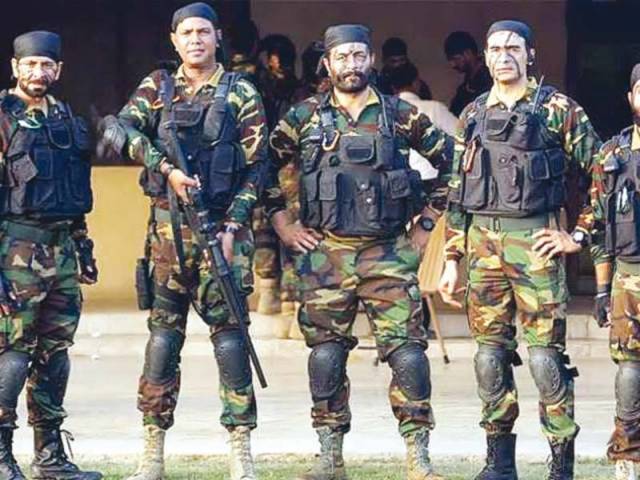 Maalik stands out for its flashes and sparks that otherwise fail to put up a great show. PHOTO: PUBLICITY

To say the least, Maalik is an unpolished film. It lacks coherence, makes aesthetic compromises on the stylistic side and tests the bladder’s optimum resistance. Yet you don’t feel like leaving the cinema.

While Ashir Azeem’s cinematic debut is a master class on how not to pace a film and how extended melodramatic scenes can cross the line between film and TV, it also manages to stand out from the league of extraordinarily-bad Pakistani films by getting two things right: having a soul and staying true to its purpose.

The core of the film lies in jingoistic propaganda but the fusion with human drama is what forms its essence; something we have longed for with preachy films, off late.

The skeleton however is deformed. As deformed as that of a man who after writing and starring in the country’s most popular crime drama, goes into slumber and wakes up for some action after 22 years. Unlike the passage of his film, Ashir himself has aged gracefully and sports white stubble with Asad, a retired army commando who runs a private security agency along with his father, General sahab (Sajid Hasan), an ex-army kingpin. Their team, like any other squad of heroes, has an angry bad guy, usually found in the interrogation room, a hot female officer (Tatmain Ul Qulb) who charms her way into situations and kicks her way out, and a bunch of ex-servicemen still very much in service. Together they form an untitled company that either charges hefty sums for services or does them for free if they feel it’s the right thing to do. Then one odd day, Asad tells his father that he is “going to do it” and goes to the police station to make a confession. So begins the story.

A presentation of PTV Quetta centre, Dhuwan had a huge cultural impact during the 90s. It was a moving picture of brotherhood, an echoing plea of loss, which made people laugh and cry, quite literally.  With Maalik, Ashir tries to invoke similar feelings but he only succeeds partially. Not that the dramatic tension within the film isn’t high enough; sub-plots such as the journey of the Afghan family are heart-wrenching and brutally honest, but perhaps the better days of our society have also passed and now it really takes a genocide to tickle the nerves that are so numb.

Whatever the case may be, the audience can’t be blamed and certainly not for the scenes where actors are forced to talk in English, a language they were not comfortable communicating in, at all. As much as a certain chunk of our society has become bilingual, speaking in a different language on the big screen requires a lot of fluency, finesse and more so, a situation to keep it natural and all of that was missing. One wonders why this trend started by Waar was consistent with another film with guns and C-130s; I guess love for the country sounds better in English.

Although Ashir manages to resolve most of the major sub-plots in an otherwise non-linear narrative, it is the pacing and duration of the smaller stories that make the film into a complete mishmash of ideas. While the smaller stories are complete and interesting on their own, the director takes too long to connect them with the central storyline which the audience forgets by this time.

Maalik is a film that stands out for its flashes and sparks that otherwise fail to put up a great show. Despite all its bruises and rusty weaponry, it survives like the soldier who has lost the battle but is surviving to tell the story. Maalik manages to create a sense of ownership amongst the audience while not sacrificing on attention-to-detail and sociopolitical history of this land.

Verdict: ‘Maalik’ is not a masterpiece yet isn’t something that should be missed. Watch it without any expectations and you might as well be surprised