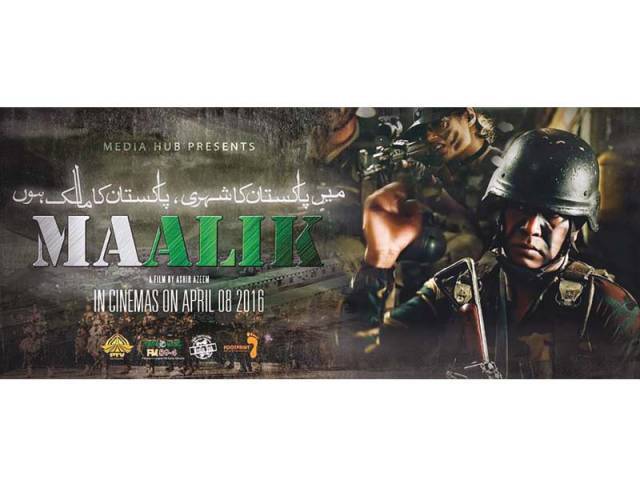 Maalik is slated to release on April 8 across Pakistan. PHOTOS: FILE

With a little over a day to go for its release in Pakistan, Ashir Azeem’s action film Maalik has passed its first obstacle after emerging from the Central Board of Film Certification’s board room, uncut.

Talking to The Express Tribune, CBFC Chairman Mobasher Hasan said the review panel has unanimously decided to give the movie a Universal (U) rating. The Pakistani U rating is the equivalent of the General (G) rating used by Motion Picture Association of America which allows for admission of audiences of all age groups. It indicates that there is nothing in the film that may offend parents once it is viewed by younger audiences.

Even though the film has been given the green light, this by no means indicates that the film does not contain graphic scenes. According to Hasan, since it is an action film it was “bound to have a few violent sequences”, including that of a beheading.

‘Maalik’ to hit theatres on April 8 Elaborating upon the decision to not remove that particular sequence or other similar scenes, Hasan said, “We decided against cutting it from the movie because it is not that gory.”

Other scenes feature the use of inappropriate language within the movie which had already been muted by the film-makers. “There are scenes that have harsh language but since this is an action movie, they were muted in the sequences only,” Hasan added.

According to Hasan, a major reason to not make excisions in the film was the “very strong take away message” that it has for audiences. Unwilling to disturb that, Hasan shared, “Maalik is a reformist film and has a positive message. It focuses on the negative aspects of our society and political circles.”

While the film has been cleared for release by the CBFC, it is yet to be censored by the Sindh Board of Film Certification (SBFC) and Punjab Board of Film Certification (PBFC). While representatives from the SBFC were not available for comment, a PBFC official said the board is expected to review the film on Wednesday. “We have received the prints today [Wednesday] with the panel censoring it tonight,” he stated.

Distributed by Footprint Media, Maalik is slated to release on April 8 across Pakistan. The film features an ensemble cast of Farhan Ally Agha, Maira Khan, Hassan Niazi, Adnan Shah Tipu and Azeem himself in lead roles.

The motion picture which marks Azeem’s comeback to the Pakistani entertainment industry after over two decades is among the few films to have their entire post-production done at home. “I will not go to Bangkok or Dubai or India. I will do everything in Pakistan and prove that we are second to none. I take pride that my film is ‘Made in Pakistan’,” shared Azeem. The soundtrack for the movie features artistes like Rahat Fateh Ali Khan whereas the background score has been composed by Sahir Ali Bagga.