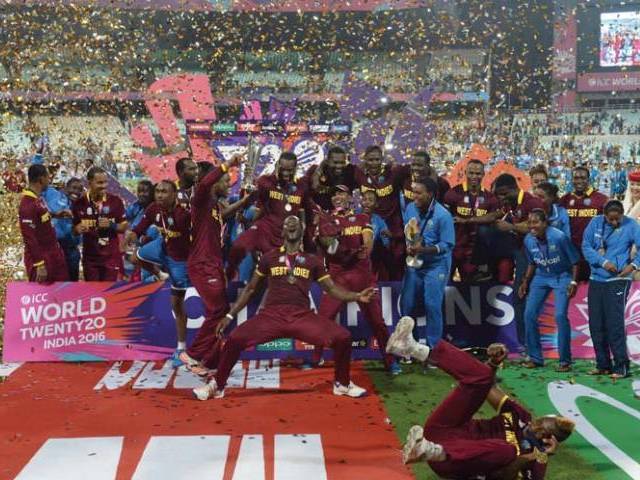 KOLKATA: The West Indies men and women cricket teams were crowned the world champions of Twenty20 cricket on Sunday, completing a rare hat-trick of titles as their Under-19 boys lifted the youth World Cup in February.

The females earlier stunned three-time champions Australia to fire the West Indies to their maiden women’s World T20 crown in a thrilling last-over win in Kolkata.

The Windies went into the last over needing 19 to win against England and with expert death bowler Ben Stokes handed the ball, it looked like England would see out the win.

But Carlos Brathwaite held his nerve to hit four consecutive sixes to fire the Windies to an unlikely four-wicket win with two balls to spare, and leaving Stokes devastated on the field.

“To see Carlos play like that at his debut World Cup was just tremendous,” an emotional West Indies skipper Darren Sammy said afterwards.

After being reduced to 11 for three, Marlon Samuels anchored the West Indies’ run chase of 156 with an unbeaten 85 off 66 balls, after England had posted 155-9 in their 20 overs. Brathwaite finished on 34 not out off just 10 balls.

The Windies also became the first team to lift the World T20 twice, after winning the tournament in Sri Lanka in 2012.

India batting wizard Virat Kohli won the Player of the Tournament award, after finishing as the second-highest run-getter of the tournament, with 273 runs in five innings at a breathtaking average of 136.50.

WI women do it in style

Chasing a competitive 149 for a win, Hayley Matthews (66) and skipper Stefanie Taylor (59) shared a blistering 120-run opening stand at the Eden Gardens stadium.

A destructive Matthews clobbered three sixes and six fours during her 45-ball blitz that made the Aussie bowling attack appear pedestrian. Taylor played a more sedate but commanding innings to lead the Windies to an historic title after three previous failed semi-final attempts.

They won by eight wickets, picking up their first win against Australia at their ninth attempt with three balls to spare. They did it by recording their highest-ever run chase in a T20 international.

“Words can’t explain what I’m feeling right now. [It] means so much for us and especially the people of the Caribbean,” said wicketkeeper Merissa Aguilleira.

Wild celebrations erupted from the Caribbean dugout as Britney Cooper hit the winning runs to script a new chapter in Windies women’s cricket. The women danced with their male counterparts, who later in the day took on England in the men’s final.