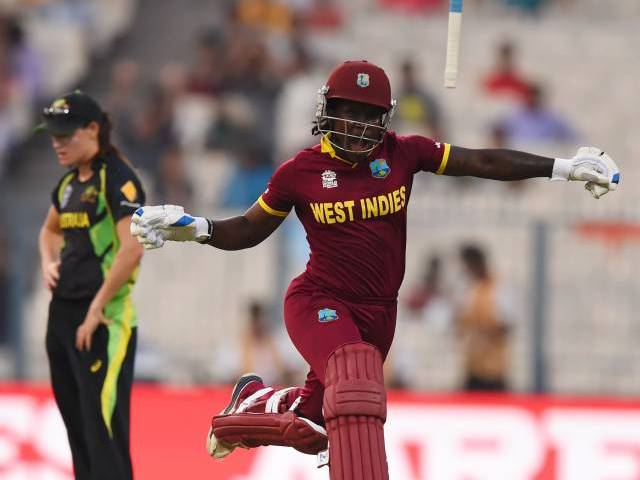 KOLKATA: Powerful half-centuries from Hayley Matthews and skipper Stafanie Taylor fired the West Indies to their maiden World Twenty20 crown in a thrilling last-over win against Australia in Kolkata on Sunday.

Chasing a competitive 149 for a win against the three-time champions, West Indies rode a blistering 120-run opening stand between Matthews (66) and Taylor (59) to triumph with three balls to spare.

The Windies won by eight wickets at the Eden Gardens stadium as they picked up their first win against Australia at their ninth attempt.

“Words can’t explain what I’m feeling right now. Means so much for us and especially the people of the Caribbean,” said Windies wicketkeeper Merissa Aguilleira.

And the #WT20 trophy is theirs. Congratulations to #WI Women! An amazing achievement! #AusWvWIW pic.twitter.com/RKmF8tbQVS

Player of the match Matthews and Taylor, who looked determined from the word go, acquired 16 runs off the sixth over, including a humongous six from Matthews.

A destructive Matthews clobbered three sixes and six boundaries during her 45-ball blitz that made the Aussie bowling attack appear pedestrian.

Taylor played a more sedate but commanding innings to lead the Windies to an historic title after three previous failed semi-final attempts.

Captain and Player of the Tournament Stafanie Taylor and her team-mates celebrate as #WI win the women's #WT20!! pic.twitter.com/9RF8JN7JWe

Leg-spinner Kristen Beams got Matthews caught at mid-wicket in the 16th over and 18 balls later Rene Farrell saw the back of Taylor but the wickets only proved to be minor hiccups on the Windies’ road to victory.

Wild celebrations erupted from the Caribbean dugout as Britney Cooper hit the winning runs to script a new chapter in Windies women’s cricket.

The Caribbean women danced with their male counterparts, who play England in the men’s final later on Sunday.

The West Indies men can now complete a rare hat-trick after the Under-19 boys lifted the youth World Cup in February.

The Aussies lost opener Alyssa Healy early but a 77-run second wicket partnership between Lanning (52) and Villani (52) set the tone for a formidable score.

Villani’s 37-ball knock was laced with nine fours as she and Lanning were helped by some shoddy West Indies fielding as captain Taylor juggled seven bowlers.

Medium-pacer Deandra Dottin was the pick of the Windies bowlers with two wickets, those of Villani and Ellyse Perry, the latter of whom chipped in with 28 runs off 23 balls including the only two sixes of the Aussie innings.