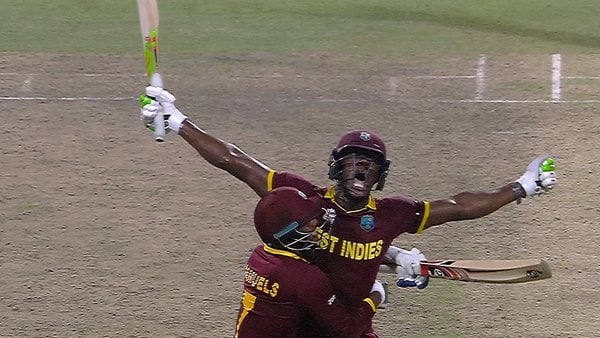 The Caribbean side won with just two balls to spare having needed 19 off the last over as they became the first team to lift the trophy twice.

Earlier, England posted 155 for nine against the West Indies.

Joe Root top-scored with 54, while Joss Buttler made 36, after openers Jason Roy and Alex Hales went for 0 and 1 respectively as England set a low run-chase target of 156.


The man of the match award goes to Marlon Samuels for his unbeaten 85: "This win is for the Caribbean. My heart goes out to the England players who gave us a tough fight in the tournament.”

Eoin Morgan: "My congratulations to the West Indies for winning the tournament. It is never a sure victory in this format, especially when you are going into the final over. We didn't have enough runs on the board to begin with. 180 or 190 would have been a good total. It was not Stokes’ fault in the last over or anyone else’s, but we're all in this together."

Darren Sammy: “I am really happy for this win and it's something we will cherish for a long time. People were wondering whether we would play this tournament or not. We also had issues with our board. We were called players with no brains. However, all of us came together and it was a tremendous experience. I don't know when I'm going to play for West Indies again, but I want to thank my team and coaching staff.”

SIX!x2 Brathwaite steals the game and the tournament from England's clutches.

SIX! Another one by Brathwaite.

SIX! Brathwaite smashes it out of the ground.

An awesome performance by Samuels so far. West Indies said they were not a one-man team, but Samuels' knock counters that statement in a big way.

The tension is palpable! 2 overs left. 27 needed. Who will win?

FOUR! Brathwaite gets lucky for a boundary.

Seven from the over.

Carlos Brathwaite is in for Sammy.

Sammy's OUT. Places it into the hands of the fielder. Seems like rest of the Windies squad wants to get out.

Darren Sammy is the new man in.

OUT! Russell tries to play a big one but gets caught on boundary.

SIX! Another one. This one went straight.

SIX! Over the midwicket rope by Samuels this time. Looks like he has got to do it alone for Windies.

FOUR! Samuels finds the boundary between midwicket and long-on.

Andre Russell is the new man in for West Indies.

OUT! Edged by Bravo. He departs and West Indies lose their fourth wicket.

DROPPED! And FOUR! A golden chance for England to get rid of Bravo.

Five from the over.

FOUR! Marlon Samuels smashes one towards off-side and moves to 41.

Four from the over.

A single and it's fifty-up for West Indies. Still a long way to go.

FOUR! Through the leg-side this time by Samuels. It's a one-man show here today.

Liam Plunkett is in for another over.

Four from the over.

Adil Rashid is in for his first over.

Just two from the over.

Samuels edges to the Keeper, but it hit the ground first! not out!

OUT! Marlon Samuels edges and the wicketkeeper takes a simple catch. Third umpire says its a Not Out. The ball touched the ground before keeper got his gloves on it.

FOUR! Through the covers for a four by Samuels.

FOUR! Top-edge and over the wicketkeeper's head for a boundary.

FOUR! Pulled away by Samuels towards midwicket.

Three runs from the over.

Five runs from the over.

Dwayne Bravo is the new man in.

OUT! Simmons is gone. The 'golden boy' for West Indies departs after getting out leg-before.

Marlon Samuels and Lendl Simmons are on for West Indies.

OUT! Gayle gets caught at mid-off by Ben Stokes. This could be the break England were looking for.

OUT! Johnson Charles gets caught by the fielder at mid-on.

Just a single from the over.

Brilliant effort by the WI & they will fancy this. England need to come up with something very special to win or for the WI to self destruct

England was rebuilding right through that innings, weren't they? That may have got them to be 30 runs short. We'll see.#WT20Final

FOUR! Smashed towards leg-side by Jordan.

Russell to bowl the last over of the innings.

Adil Rashid is the last man in.

OUT! Liam Plunkett edges it into Badree's hands.

Caught at midwicket! Willey departs for 21.

FOUR! Smashed down the ground by Willey.

SIX! Straighter one by Willey.

SIX! Smashed out of the ground by Willey.

Just two from the over.

David Willey and Chris Jordan are batting for England at the moment.

OUT! A poor shot by Root and an easy catch by the fielder on leg-gully.

Caught! Nicked down the leg-side. Moeen Ali departs for duck.

Moeen Ali is the new batsman for England.

OUT! Top-edged by Stokes and an easy catch by the fielder.

FOUR! Root isn't stopping with those boundaries. Cut through the off-side this time.

A double to end the over.

FOUR! Pulled away by Ben Stokes. 100-up for England.

A single and fifty-up for Joe Root.

FOUR! A cut stroke by Root for a boundary.

Top edge by Root. Well fielded by West Indies. No boundary for England.

Six from the over.

Ben Stokes is the new man in.

CAUGHT! Buttler departs just when England needed him the most.

SIX! Another one by Buttler, this time through off-side.

SIX! Buttler goes straight and out of the ground.

Both Root and Buttler are running hard at the moment to put up a decent total for England.

SIX! Buttler smashes it towards off-side. Fifty-up for England.

Root has moved into 30s and is looking to salvage England's innings.

Six runs off the over.

FOUR! Root smashes it towards midwicket.

FOUR! A cut stroke by Buttler.

A wicket maiden over.

Jos Buttler is the new batsman in.

OUT! The skipper edges it to Chris Gayle on slip. Morgan walks back to the dugout.

Badree is back in action.

FOUR! Root goes towards long on. This has been an expensive over for West Indies.

FOUR! This time it's Morgan who finds the cover boundary.

FOUR! Root with another cover drive for England's second boundary.

Just one from the over.

Eoin Morgan is the new man in.

Flicked towards leg side by Root for a single.

Andre Russell to join in on the bowling attack.

A single to end the over.

FOUR! Root plays one towards the cover boundary.

BOWLED! Roy clearly misses that one. That's a bad start for England.

Jason Roy and Alex Hales to open batting for England.

Sammy: Not many gave us a chance but we knew what we could do. No changes for us today. I would like to congratulate the women's team for their win here today.

Morgan: Today we just have to take one more step. We would have done the same, would've bowled first. Looks a really good surface, big covering of grass. Normally it's quite bare and takes a bit of turn. We also have made no changes in our team, and we hope to have a good encounter here today.

Marlon Samuels is named Man of the Match for his unbeaten 85: "I know about finals, when I come to finals, I turn up for the team. All respect to the England players, we want to move from strength to strength - this is for the Caribbean. If we get a good start, then I can step on it, we lose wickets early so it's different. I didn't say much other than swing and swing hard. This is for Shane Warne." Bit of a parting pop from Marlon... Spicy. 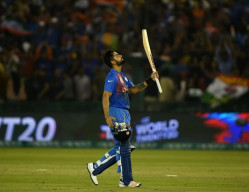 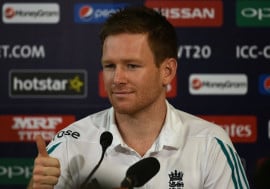