Securi­ty height­ened for over 200 parks across the city
By Our Correspondents / Photo: AYSHA SALEEM
Published: March 29, 2016
Tweet Email 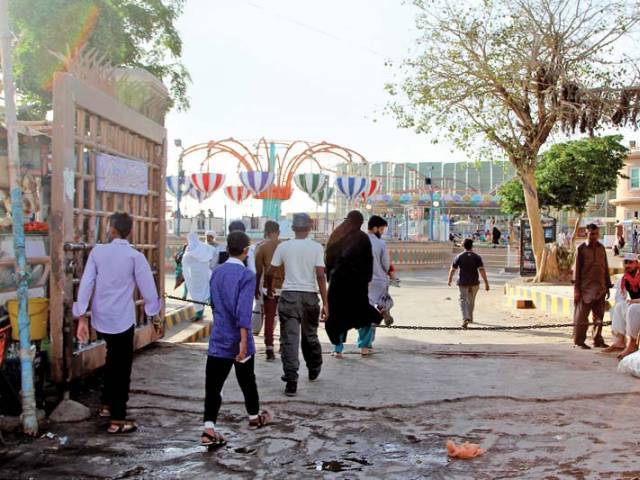 A day after the Lahore park attack, There was lax security witnessed at Funland in Clifton. PHOTO: AYSHA SALEEM/EXPRESS

The city’s largest public park, Safari Park, was closed on Monday following the deadly explosion in Lahore’s Gulshan-e-Iqbal Park that claimed the lives of over 72 people.

This is the first time that the doors of the public park have been closed in the aftermath of a law and order situation, said Karachi Metropolitan Corporation (KMC) culture, sports and recreation department’s senior director Raza Abbas Rizvi.

Rizvi, who looks after the management of three mega parks of the city, including Karachi Zoological Garden, Safari Park and Aladin Amusement Park, said that there are some security concerns. “It wasn’t our decision but the police asked us to close it,” Rizvi told The Express Tribune. “We are not sure when it will be open for the public again,” he added.

According to Rizvi, Safari Park, which he believes is Pakistan’s biggest recreational facility of its kind, has its own security system but, he added, it’s unarmed and untrained. “We have made our security high alert but it appears weak to monitor and overcome a situation in which a suicide bomber can enter,” he explained.

“To close the park is not the solution,” Rizvi admitted, adding that it was the sole responsibility of the law enforcement agencies to provide security to the public. “I hope that Safari Park will not be closed for a long time.”

Meanwhile, the security arrangements have been heightened at more than 200 parks across the city. The law enforcers have enhanced patrolling and snap-checking in the city, particularly in the surrounding areas of public parks.

“We are trying our best and we have already enhanced police patrolling and snap-checks,” said District East police chief DIG Kamran Fazal, while talking to The Express Tribune. “The police are already engaged in dealing with the law and order situation.”

DIG Fazal further said that the police teams were already on high alert due to the matriculation examinations and the polio drive.

According to DHA spokesperson Rafat Naqvi, the strength of DHA’s vigilance team has been enhanced around all parks, especially Nisar Shaheed and Zamzama parks. The vigilance teams will be patrolling the areas around the parks and are in coordination with the police to deploy policemen at parks during visiting hours, he said.

KMC parks and horticulture director-general Asadullah Shah said that it was not possible to ensure complete security to all parks but, he added, all possible measures have been taken after the Lahore incident.

The officials have been directed to take maximum security measures at all kinds of parks, he said.

Speaking to The Express Tribune, Dolmen Group CEO Nadeem Riaz said that strict security has already been provided to their open-air amusement park, Sindbad, located in Gulshan-e-Iqbal. “We have not yet closed Sindbad anywhere in the city,” he said, adding that security has been heightened following the Lahore blast.