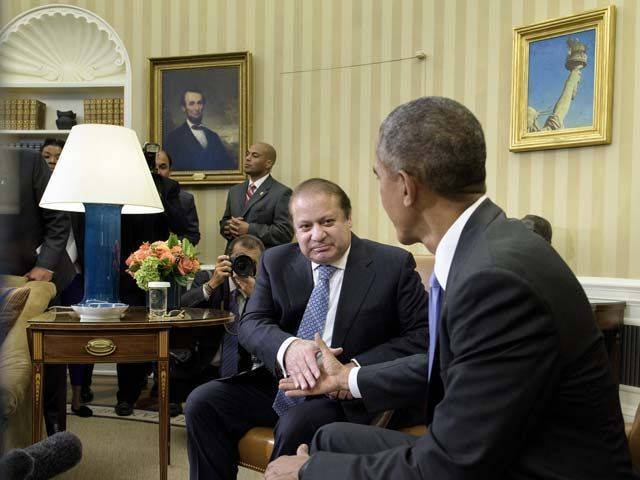 Prime Minister Nawaz Sharif and US President Barack Obama shake hands before a meeting in the Oval Office of the White House October 22, 2015 in Washington, DC. PHOTO : AFP

Prime Minister Nawaz Sharif has cancelled his scheduled visit to the United States in the backdrop of Sunday’s deadly terror attack in Lahore.

The premier was due to visit Washington to participate in the fourth Nuclear Security Summit (NSS) on March 31, the official statement said.

On Sunday, at least 72 people, including 29 children, were killed and 233 were wounded in a blast near Gulshan-e-Iqbal Park in Allama Iqbal Town.

The prime minister spent the entire day today in Lahore condoling with the bereaved families, as well as visiting the hospitals to meet those injured in the tragic terrorist attack, the communique added.

Nation in mourning after suicide blast in Lahore kills 72, including 29 children

PM Nawaz underscored that such incidents further strengthen the government’s resolve to eradicate the menace of terrorism from its roots.

The Pakistan’s delegation to the nuclear summit will now be led by the Minister of State and Special Assistant to the Prime Minister Syed Tariq Fatemi.

Pakistan has actively participated in the NSS process and has developed a robust Command and Control System and multi-layered security of its nuclear programme.

A meeting between PM Nawaz and his Indian counterpart had also been predicted, with the foreign office stating that no proposal from the Indian side was received in this regard.

Earlier this morning, the prime minister directed the law enforcement agencies to step up counter-terror operations and their abettors in southern Punjab, and ensure proactive coordination between law enforcement and intelligence agencies.

The premier, flanked by Interior Minister Chaudhry Nisar Ali Khan, also visited Jinnah Hospital and inquired after the health of those injured in the attack.

A faction of the Tehreek-e-Taliban Pakistan (TTP), Jamaatul Ahrar, claimed responsibility for the deadly suicide attack, saying Christians were their target.

PM vows to avenge ‘every last drop of countrymen’s blood’