#GirlsOnBikes sets off on road to equality

#GirlsOnBikes sets off on road to equality

Girls on Dhaba co-founde­r and organi­ser says women have the right to be on the street­s as much as anyone else
By Ayesha Mir / Amel Ghani
Published: March 27, 2016
Tweet Email 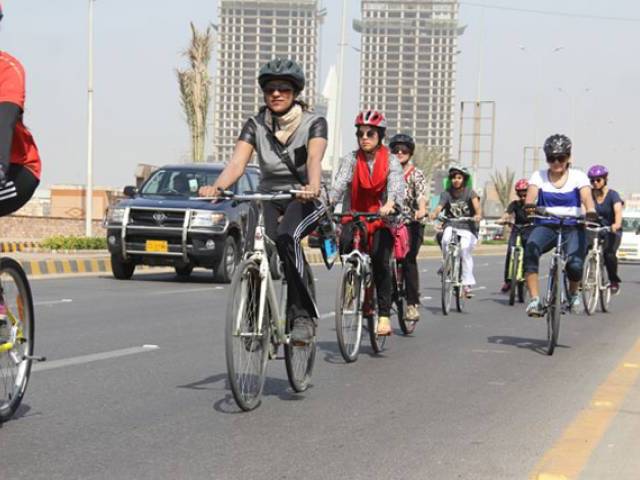 KARACHI / LAHORE: Karachi’s Sea View took on a different look on Sunday as a group of girls on bicycles gathered outside McDonald’s.

The #GirlsOnBikes rally was organised simultaneously in Karachi and Lahore by the Girls at Dhaba’s community, which started from a hash tag #GirlsAtDhabas and has gone on to become a movement to reclaim public spaces for women.

The rally was organised in support of Aneeqa Ali, a girl who was harassed, hit and injured by some men in a car while she was cycling to meet the Critical Mass Lahore group recently in Lahore.

Ali, a regular cyclist with CML, narrated the incident in a social media post, discussing how two men followed her in a car, hooting and honking to get her attention. When she chose to ignore them for a large part of her ride and went into a service lane to avoid them, they proceeded to hit her with their car. The #GirlsOnBikes rally was an all-girls event; men were asked to lend their bikes to girls who didn’t have any and lend their support to them instead of riding them themselves.

The girls, over 20 in number, proceeded to peddle from main Sea View road to Salt n Pepper restaurant, and back.

Girls bicycle from Minar-i-Pakistan to Wagha

Sheen Ahmed, who had been biking around Karachi with the critical Mass group, came to support the group. “I think it was important for us to come out today because we (women) want to feel safe even when we are not riding our bikes with men,” said Ahmed. “Small steps like this can make a big difference” she added.

Sadia Khatri, co-founder of Girls at Dhaba’s and one of the organisers of the rally, said, “Every time something bad happens the immediate reaction is to stay indoors, stay safe. This is a way to say that we (women) can and should be on the streets and have a right to be there as much as anyone else.” Admitting that things would not change overnight, Khatri said she believed in the power of the visual, such as seeing a bunch of girls riding a bike together. “That is something you think about (girls riding bikes together) and hopefully it will be something that changes what you think is ‘normal’ even on a small level.” “The idea is for girls to go out on their own. Fear is the biggest thing that stops us from going out and doing anything like cycling or walking and I think when we actually start to do these things is when start to overcome that fear,” said Khatri.

Eliya Syed was one of the many ‘first timers’ who rode a bike on the public streets of Karachi. “It felt great. I live right here, on Khayaban-e-Ittehad and I have never actually cycled on the road so it felt amazing. Even when I was coming here in the morning I wanted to ride to the venue on my bike but my mother insisted on dropping me. That just says a lot.”

Lamenting the fact that girls can’t even go out alone on the road even close to where they live, she added, “Even right now, when there were so many of us together, there were guys staring at us and passing comments. That was very insulting and that shouldn’t be happening. We need to change that and that’s exactly what is happening right here.”

Syed was one of the few who didn’t have a bike of her own and borrowed it from a friend of a friend. In Lahore, women gathered at the roundabout opposite Jalal sons and peddled their way towards Main Boulevard as onlookers looked on.

The gathering was jointly organised by CML and Girls at Dhabas to speak out against harassment women face in public spaces. “The purpose of this is to increase acceptability in people for women being on the road and to help women feel more comfortable with the idea as well,” said Noor Rahman, one of the organisers and member of CML.

Staring, occasional catcalling and leery smiles are common experiences for a woman in public in Lahore but at times it escalates into physical intimidation as was the case with Aneeqa Ali. Talking to The Express Tribune about the incident, Ali said, “At first I did not want to speak about it because I thought it would discourage women from becoming a part of Critical Mass Lahore.”

150 women participate in motorcycle rally on The Mall

She said during her rides with the group she had experienced varying degrees of harassment but this was the first time someone had actually tried to harm her. “Sometimes people would bring their car really close to the bicycle but that was the extent of it,” she said. Ali then decided that harassment in public faced by women was too common a phenomenon to simply ignore it. “We need to talk about it because staying silent is not the solution,” she said.

Ali was hopeful that through the ‘Girls on Bikes’ initiative more women would join CML. “We want more women to join since it would balance the ratio of men and women in the group,” she said.

Nation in mourning after suicide blast in Lahore kills 72, including 29 children