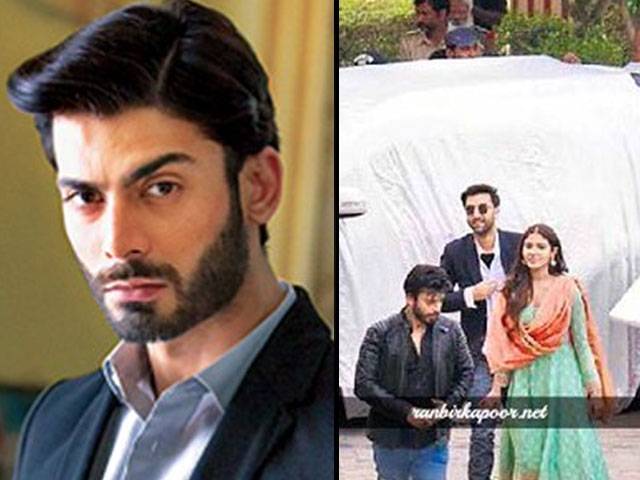 After his astronomical success in Kapoor and Sons, Pakistani heartthrob Fawad Khan has been seen on the sets of Karan Johar’s directorial Ae Dil Hai Mushkil in Rajasthan, along with co-stars Anushka Sharma and Ranbir Kapoor.

Anushka was seen sporting an orange and blue suit accessorised with jhumkas, while Ranbir donned a blazer and jeans, and Fawad threw on a black leather jacket to complete his bad boy look. The actors are currently in Rajasthan for the filming of a romantic number between Anushka and Ranbir. Could Fawad be part of the number as well? Ae Dil Hai Mushkil has had fans excited for quite some time now, with its star studded cast – Ranbir Kapoor, Anushka Sharma and Aishwarya Rai Bachchan in key roles, along with cameo appearances by Pakistani actors Fawad Khan and Imran Abbas.

Although little has been disclosed about the characters in the film, rumours are abuzz that Fawad will be seen playing the role of a DJ and Aishwarya Rai’s long lost love, which was earlier played by Shashi Kapoor. The film is said to mimic the 1977 movie Doosra Aadmi which had Rishi Kapoor and Neetu Singh in lead roles. The story shows a woman (played by Rakhee Gulzar in the 1977 film and now portrayed by Aishwarya) who has lost her beloved and many years later meets a young man who reminds her of him. However, this man is already committed.

When asked about the role, Aishwarya said, “It is a very interesting role, and my first for Karan Johar. We’ve come this close to working together so many times in the past. This time I had to say yes. It is not a conventional romantic lead. Just wait and watch.”

Pakistani actor Imran Abbas is also a part of the cast for the film. According to a report published in Pinkvilla, Imran and Anushka will play Pakistanis in the film. Ae Dil Hai Mushkil continues to excite audiences who are eagerly waiting for its release.

ADHM is all set to release in October.

I don’t have the energy and dedication for Hollywood: Kareena