Direct­or Shakun Batra’s second effort is a film that begs to be heard, not just watche­d
By Zeeshan Ahmad
Published: March 22, 2016
Tweet Email 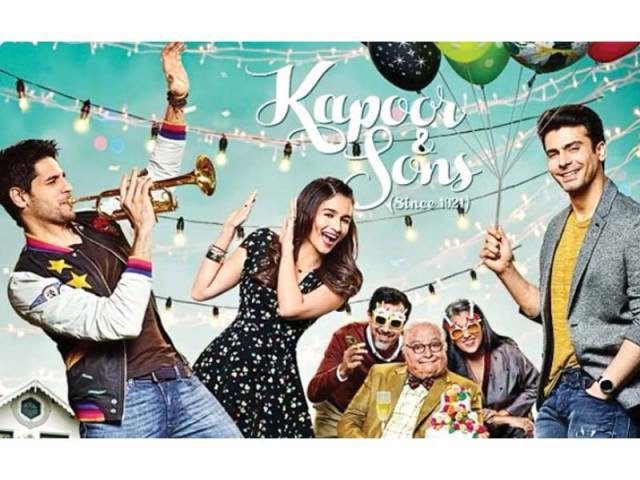 Subtlety is the name of the game as far as the film’s script is concerned. PHOTO: PUBLICITY

Life’s but a walking shadow, a poor player

That struts and frets his hour upon the stage

And then is heard no more. It is a tale

Told by an idiot, full of sound and fury,

Sound design is perhaps the most overlooked and under-appreciated aspect of film-making. Borrowing from Macbeth’s famous soliloquy, too often sound design signifies not much – if not nothing at all – in film.

In the age of CGI blockbusters and rapid-fire, choppy narratives, intelligent sound design is exceedingly rare. Even rarer is sound design that creates and modulates dramatic tension while remaining grounded and familiar.

In Kapoor & Sons, Shakun Batra has managed to do exactly that – create with sound virtually another character in the drama that plays out between the film’s leads. While the characters and events in the film live up to the theme of Macbeth’s aforementioned monologue, it is delightful that the sound in Kapoor & Sons signifies anything but nothing.

This for us has been the standout feature of a movie that, as many other reviews will attest, offers one powerful performance after the other.

Reviews are in: Is ‘Kapoor & Sons’ worth the hype?

Some may say Kapoor & Sons is a story of forgiveness and acceptance. But this too, while true, only scratches the surface of a narrative which, despite at times relying on clichés and cheap tricks, still maintains significant richness.

For me, the story was also about unpredictability, both of life and death. Watching movies and reading stories, we can take for granted how characters in them persist at least as long as their arc continues. Films and stories like Kapoor & Sons can be a reminder that in real life, some arcs may be cut short abruptly and forever remain unfinished.

The greatest success of the script of Kapoor & Sons is that it explores all these aforementioned themes, and certainly more, without coming across as heavy handed.

Subtlety is the name of the game as far as this script is concerned. As much as possible, it adheres to the ‘less is more’ formula. There are no grand monologues stating the obvious. A lot about the characters, their conflicts and back stories is left to the imagination. Elsewhere, the movie admirably relies on the other great tenet of good film-making: “Show, don’t tell”. Both these aspects provide a refreshing break from the common tropes of Bollywood.

Moments in the film reserved for humour are genuinely entertaining. Those that elicit tears do admittedly make it very difficult to keep them from trickling out.

All this, coupled with the sound and exceptional performances of Rajat Kapoor, Ratna Pathak, Fawad Khan and Sidharth Malhotra, ensures that Kapoor & Sons surpasses its failings by a large margin. Speaking of performances, the film makes it hard to pick out one that stands out. For us, Fawad steals the show in the final act, but by a very narrow margin.

Verdict: Kapoor & Sons is a lesson in how a film can be entertaining, emotional and thought-provoking at the same time. A compelling script and brilliant performances in particular make it a must-watch!