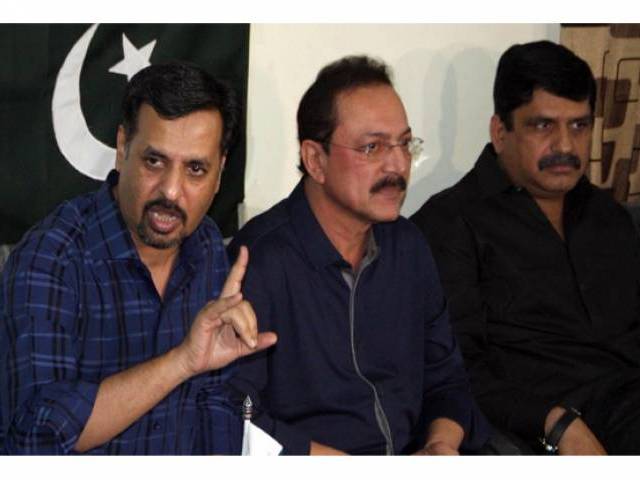 Advocate Anis Ahmed Khan, a senior MQM member who had been inactive since 2013, announced leaving his party after 32 years of association at a press conference held in Defence, Karachi.

Since Kamal’s entry in the political scene of Karachi on March 3, Anis’s name had been doing the rounds for one of the potential candidates for joining the new unnamed party.

Anis had been living in London since 1998 and remained a member of the MQM Rabita Committee between 2003 and 2012. He was sacked by the party in 2012 over violations of organisational discipline, only to be re-inducted later.

When the Rabita Committee was dissolved after the general elections in May 2013, Anis was expelled from the policymaking body by MQM chief Altaf Hussain, and party workers were told not to maintain any contact with him. His party membership was, however, not cancelled.

“I had mentally joined this [Kamal’s] party three years ago as I was confident that one day people would break their silence and come out to speak,” Anis said while speaking to the media at the DHA residence of his new leader Kamal.

“He [Altaf] is incapable of leading the Mohajir community,” he claimed.

But unlike previous press conferences where former party leaders have blamed Altaf for taking funds from Indian intelligence agency RAW, Anis chose to speak briefly on this. He said there had been such allegations and documents, and it was the responsibility of the state to bring them forward.

Anis termed the infamous May 19, 2013 incident, when MQM leaders were manhandled by party workers, “the last nail in the coffin”. The Rabita Committee and the Karachi Tanzeemi Committee were dissolved later.

“I left the MQM on May 19, 2013. I was among those who believed a wrong thing was happening… The international secretariat can attest to this,” he added.

Anis said he wished Altaf lived a long life to see with his own eyes that the ground was crumbling beneath his feet. Without referring to anything, he advised the MQM chief to get treatment and seek forgiveness from God. “I am ready to face punishment for my sins,” he said.

The former MQM leader’s words echo the sentiments of his new party colleagues, who have all criticised Altaf for being the only reason the party was in trouble.

About the big gathering of the MQM on its 32nd foundation day, Kamal said if a large number of people attended the rally, then it meant they were not being stopped from attending gatherings, as claimed by the party.

“The speculations that we are Haqiqi-Part 2 and the establishment is supporting us are all false. No one is stopping workers from going or closing down offices. When Haqiqi came, not a single person was found standing at Nine Zero,” he claimed.

Anis Kaimkhani, who launched the dissident group with Kamal, urged the government to forgive the children of Karachi while referring to the MQM workers who have been arrested or killed during the ongoing Karachi operation.