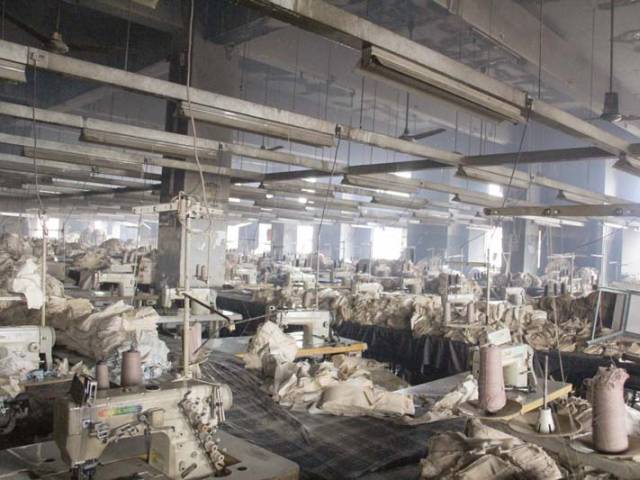 Around 260 people died in the blaze that erupted at Ali Enterprises garment factory located in Baldia Town on September 11, 2012. The incident is deemed as one of the deadliest industrial disasters in the country. PHOTO: FILE

Labour rights groups from across the world are joining hands with the families of the victims of the Baldia factory fire to demand safety rights and compensation, starting April 14.

Around 260 people died in the deadly fire that erupted at Ali Enterprises garment factory located in Baldia Town on September 11, 2012. The incident is deemed as one of the deadliest industrial disasters in the country, where the textile sector contributes 57% to the total exports of $29.9 billion, according to the State Bank of Pakistan data for 2014-15.

“Three years on, neither has the case trial been initiated nor have the victims been paid adequate compensation,” said Mansoor. “Those killed in the fire were bread earners of their families. Their dependants are now living hand to mouth. And most of those who fortunately survived have been crippled for life.”

The plight of the survivors and their families has attracted the attention of international organisations, such as IndustriALL, UNI Global, Medico International, Clean Clothes Campaign and European Centre for Constitutional and Human Rights. These groups are committed to highlighting the plight of labourers across the world and to get justice to the affectees of the Baldia factory fire, Mansoor added.

The decision to start a worldwide movement was taken during a conference in Nepal in which major international labour organisations participated, he explained, adding that representatives of the Baldia factory fire affectees’ association were also invited there.

A senior vice-president of the association, Saeeda Khatoon, who lost her only son, Ayaan, in the fire, was part of the Pakistani delegation. She recalled how everyone in the audience has tears in their eyes when she described the ordeal of the victims.

“I have not forgotten that fateful day when my world was turned upside down. The flames rolling out of the factory still haunt me in my dreams,” said Khatoon. “But I have decided to fight instead of mourning. I am fighting for the 260 people who were killed and for those who are still working in the same conditions as the workers in Ali Enterprises were,” she said.

On Sunday afternoon, Khatoon addressed a labour conference at PMA Hall, jointly organised by NTUF and the affectees’ association. She mentioned the legal case against KiK Textilien und Non-Food GmbH, a European retailing giant who was the major buyer of the Baldia factory products, in a high court of Dortmund in Germany. The case was strong enough to also hold them responsible for the tragedy, she said. “We see success in the near future as the court takes up the case for hearing which is expected in a couple of months.”

According to an international agreement, the buyers must ensure work place safety, health and payment regulations and workers’ rights at the production site. In the case of the Baldia factory, several audits were conducted but the situation remained the same. A similar case has been filed in Italy against RINA, the company that issued a clean chit to Ali Enterprises in a social audit and it is going to be heard soon.

Referring to the revelations made in a recent investigations report that found arson as the main cause of the fire, Workers Rights Movement leader Gul Rehman said the lack of workplace safety cannot be ignored whether the fire was caused by arson or an accident. Casualties in the fire multiplied when workers could not found a way out of the premises since there was no emergency exit functioning, she said.  “The case has seen its fair share of delays, changing investigations and political point scoring,” said Rehman. “The plight of labourers is, however, still in place and no one cares about it. That’s why labourers need to get united and demand their rights themselves.”