Arms and ammuni­tion were also seized from the compou­nd
By Our Correspondent
Published: March 20, 2016
Tweet Email 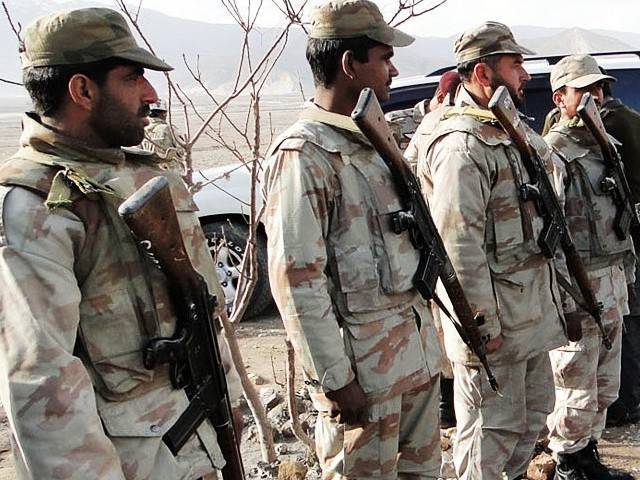 Four separatist militants were killed and a commander of an outlawed group was arrested in separate raids in different parts of Balochistan, the Frontier Corps (FC) said on Saturday.

Paramilitary troops raided a compound in the Chatter area of Naseerabad district after they were tipped off about the presence of militants from a proscribed group in the area, an FC spokesperson said.

The raid triggered a gunfight between the paramilitary troops and the militants hiding in the compound. Four insurgents were killed and their local commander was wounded in the exchange of fire, the spokesperson said, adding that the raid also yielded 13 arrests.

However, he would not say which group the dead or arrested militants belonged to.  Arms and ammunition were also seized from the compound. Separately, the FC spokesperson said a ‘fervent commander’ of a banned separatist group was arrested in a raid in Panjgur district on Friday. The raid was carried out in the Garmakan area of Panjgur.

“The arrested terrorist was involved in targeted attacks on security forces and extortion,” he said, without naming the ‘terrorist’ or his group. “Five sub machine guns (SMGs) and a large quantity of bullets were also seized,” he said. The commander was driven to an undisclosed location for interrogation.

Also on Friday, five suspects were detained by FC troops and intelligence sleuths from the Tump area of Turbat for their suspected links with an armed group. The FC spokesperson said it was an intelligence-based operation (IBO). “Arms and ammunition were also seized during the operation.”

In another operation jointly carried out by the FC and police in the Chalo Bavri and Satellite Town areas of Quetta Friday morning.

A sub machine gun and a pistol were recovered from their possession and they were shifted to an unidentified location for questioning.

Security forces have stepped up operations in the violence-wracked Balochistan province since the announcement of the National Action Plan against terrorism last year. Balochistan has been wrecked by a low-key insurgency since 2004, which became deadlier after the killing of Baloch chieftain Nawab Akbar Bugti in 2006.