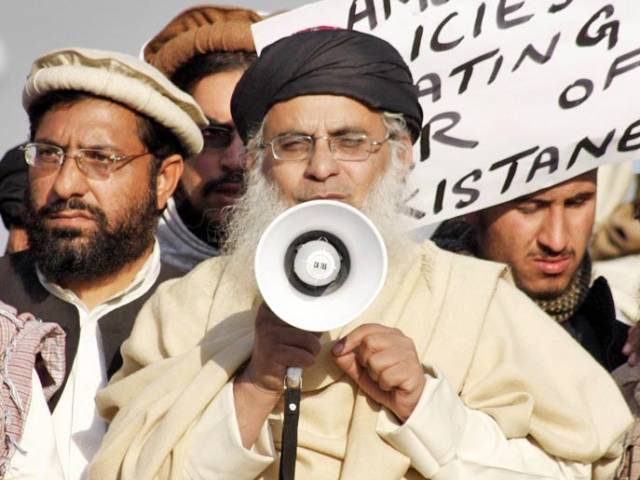 “The government’s decision is an insult to all those who had instituted criminal cases against Musharraf,” Aziz’s spokesperson, Maulana Abdul Qadir quoted him as saying.

Further, while speaking to The Express Tribune, Qadir said that the government by allowing Musharraf to leave the country, has denied justice to hundreds of people.

On July 3, 2007, Musharraf had ordered a military operation against the mosque administration for challenging the writ of the state.

The spokesperson further added that Aziz while expressing disappointment in the country’s media for its ‘negative role’ on religious matters, particularly the Lal Masjid and Jamia Hafsa, decided to avoid journalists.

“Media has always distorted his statements and press interviews,” the spokesperson protested. “But we understand very well that press is not free in our country.”

In February, Aziz announced he was ready to forgive Musharraf and others in the Lal Masjid case. “I will soon be able to persuade some of my family members and will announce the forgiveness publicly,” Aziz told reporters, saying he did not make any deal with anyone regarding the case.

The cleric claimed that Musharraf would not have committed such a mistake had Sharia law been enforced in the country. “Musharraf is my Muslim brother and I will pardon him after consultation with my family members,” he said.

Highlighting the importance of forgiveness in Islam, Aziz said that people do quarrel but then they forgive each other and reunite and we should also unite for Quran and Sunnah.

However days after the announcement, heirs of those killed in the 2007 Lal Masjid military operation accused Aziz of ‘dictatorship’ by pardoning the former military ruler.

Maulana Abdul Aziz to be appear before court on Tuesday

According to Qadir, the cleric still stands by his decision of pardoning Musharraf and that the case is still in the court as families of those killed in the operation are not willing to forgive Musharraf.

“It is a mockery of justice that a day before the government decided to allow the former military ruler to travel, a sessions court in Islamabad had maintained its earlier orders regarding issuance of non-bailable arrest warrant of Musharraf in the Abdul Rashid Ghazi murder case,” the spokesperson stated.

Ghazi, a younger brother of Aziz was also killed during the military operation.

The murder case, against Musharraf was instituted by Haroon Rashid, the son of slain cleric through Advocate Tariq Asad in a sessions court.

During the hearing when the court re-issued arrest the arrest warrant, Asad argued that after the recent ruling of the Supreme Court (SC), the government was likely to remove Musharraf’s name from the Exit Control List (ECL). He contented if allowed to go abroad, the former president would not come back to face cases pending against him in different courts, including the Lal Masjid cleric in the session court.

Musharraf’s counsel while opposing the advocate’s arguments submitted an application seeking a day’s exemption for his client, stating that the former president was admitted in the hospital and could not appear before the court due to his sickness.

The spokesperson also added that a day after SC’s ruling, Musharraf was allowed to leave the country and upon arriving in Dubai for medical treatment, he summoned an important meeting of All Pakistan Muslim League (APML) at his residence.

“Through Musharraf’s case, it has been proved that everyone is not equal before the law,” the spokesperson regretted.