Activi­sts want cows to be given the specia­l status of "mother of the nation"
By AFP
Published: March 18, 2016
Tweet Email 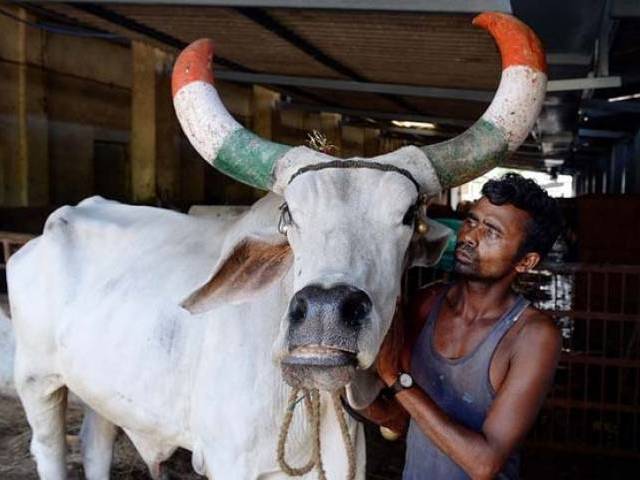 RAJKOT, INDIA: Eight Hindu cow rights activists drank pesticide as part of a protest in India calling for the animals to be given greater protection, with one protester dying of his injuries, police said.

The “gau bhakt”, or cow worshippers, consumed the poison at a rally outside a government office in western Gujarat state Thursday.

They were protesting at what they say is the ongoing slaughter of cows, considered sacred by India’s large Hindu population, despite a widespread ban on killing the animals.

“These men had come with bottles of poisonous substance and consumed a small portion in front of the collectors office”, Manish Nakum, a police inspector investigating the case, told AFP.

“All were rushed to the government hospital where one of them, identified as Gabhru Bharwad, 40, died during treatment in the evening ,” he said.

Nakum said he did not believe the men, who drank a mild pesticide used on cotton plants, intended to commit suicide.

Cow slaughter and the consumption of beef are banned in Gujarat and several other states in officially secular India.

But the activists claim cows are still being killed illegally and want cows to be given the special status of “rashtra mata” (“mother of the nation”).

Four of the protesters, aged in their twenties and thirties, were moved to a private hospital after their condition deteriorated, police said.

Dhaval Pandya, who participated in the protest in Rajkot city but did not drink pesticide, told reporters that cow slaughter was rampant in India.

“So to protect cows, which are holy to us like gods, we need to declare it as the mother of the nation,” he said.

Around 27 members of the same group also tried to block roads in Rajkot, but were detained, police said.

Around 80 per cent of India’s 1.2 billion population is Hindu, but it is also home to large numbers of Muslims, Christians and Buddhists.