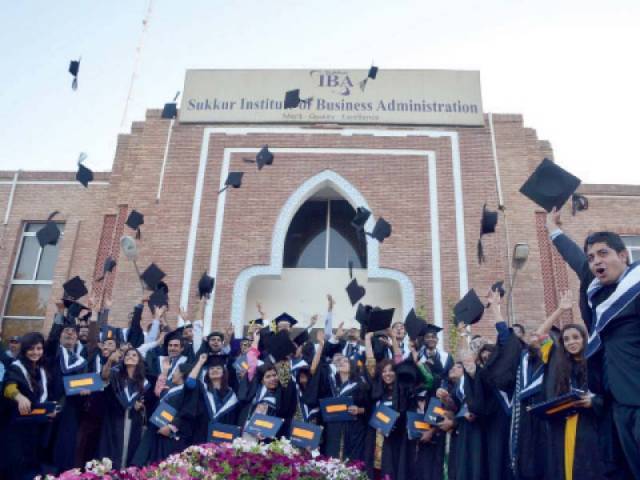 SUKKUR: As many as 150 graduates of the Institute of Business Administration (IBA), Sukkur, received their degrees, among them nine who received gold medals, at the third convocation of the institute at its auditorium on Saturday afternoon.

Chief Minister Qaim Ali Shah and the leader of the opposition in the National Assembly, Khursheed Ahmed Shah, awarded the degrees and medals to the students who passed with flying colours in disciplines such as business administration, electrical engineering, computer science and education and mathematics.

The nine gold medals were awarded to Muhammad Saqib of Master’s of Science (MS) in management, Attaullah of MS in computer science, Faryal Aijaz of MS in applied mathematics, Ali Raza Saeed of the four-year programme of Master’s in Business Administration (MBA), Paras Sindhu of the two-year programme of MBA, Shafaq Siddiqui of Bachelor’s of Science (BS) in computer science, Faiza Azhar of BS in software engineering, Waqas Ahmed of Bachelor’s of Engineering in electrical engineering and Zoya Juman Jamro, who pursued an associate degree in education. Three silver medals were awarded to students while a bronze medal was also given away.

The chief minister said that Sindh is blessed with immense talent and was hopeful that the graduates passing out from Sukkur IBA will prove to be a source of pride. He claimed that a lot has been done in the education sector and, therefore, it would not be wrong to say that Sindh’s education will not only prove to be the best in the country but throughout the Subcontinent. “Today, you are setting foot in the practical life and are going to face many challenges,” he said, addressing the students. “But, I am optimistic that you will overcome all the challenges and leap forward to a brighter future.”

He said with the help of quality education that the graduates have received from Sukkur IBA, they will have no difficulty in finding a lucrative job. The CM said that providing employment was on the top of former prime minister Benazir Bhutto’s manifesto, adding that hundreds of educated youth were provided jobs in her tenure and the Sindh government is still providing them jobs.

Qaim Ali Shah said that Khursheed Shah has been complaining that the chief minister has done nothing for the development of Sukkur. “Shah sahib, we have given you the most modern institutes [such as] Sukkur IBA,” he said. “What else are you asking about?” Talking about the development works in Tharparkar, he claimed that the development works done by the Pakistan Peoples Party-led government during the last five years were more than those done during the last 50 years. The chief minister also announced a grant of Rs40 million for Sukkur IBA.

Earlier, in his welcome address, Sukkur IBA dean and director Nisar Ahmed Siddiqui said that the institute had become a degree-awarding institute in 2006. “Unlike other universities, we are producing graduates who are absorbed in the market,” he said. “Therefore, we term Sukkur IBA a change maker.”

He said that the varsity’s talent hunt programme serves as a bridge to fill the gap between the rich and the poor. Under this programme, 400 to 500 students are selected, who are taught English, mathematics and computer studies for six months, he said, adding that during those six months, the students get free accommodation, books and Rs3,000 as a monthly stipend.