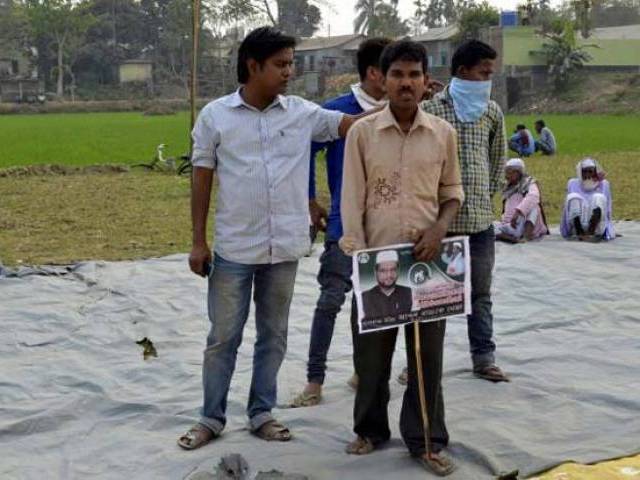 In campaign rallies in Assam, officials of the BJP have also promised to identify and deport younger illegal migrants, in response to rising discontent among the state’s Hindus.

When Assam elects a state legislature in April, an estimated 10 per cent of its 20 million voters will be Muslims who have migrated since the 1950s from the former East Pakistan, later Bangladesh, and gained Indian citizenship.

“Legal Indian citizens are being branded as Bangladeshis,” student Ismail Hussain, wearing a white skullcap, told Reuters at a rally held by a mainly Muslim party in Assam.

“The BJP can’t just do what they want. We have faith in the Indian constitution.”

Modi, 65, swept to power less than two years ago with a promise of jobs and growth, playing down his roots in the powerful Hindu-nationalist umbrella group to which his party is affiliated.

Yet, after a heavy defeat last autumn in Bihar, the BJP has pursued a more confrontational line. It has promoted the idea that India is a Hindu nation and rounded on “anti-national” opponents, in what critics say is an attempt to marginalize minority Muslims.

India is officially secular, but four-fifths of its 1.3 billion people profess the Hindu faith. Muslims comprise 14 per cent of the population, with Christians, Sikhs, Buddhists and others making up the rest.

At 34 per cent, Assam has the second highest percentage of Muslims of any Indian state. The BJP’s plan risks re-igniting communal tensions that have led to deadly clashes between Hindus and Muslims, although analysts doubt there will be a full-scale drive to expel Muslim immigrants.

“All this is pre-electoral mobilisation,” said Ajai Sahni of the New Delhi-based Institute for Conflict Management, which tracks security issues across South Asia.

Indian Muslim allegedly forced to vacate flat because of her religion

“You don’t have a state that has the capacity, the instruments and the institutions to do anything about this.”

If the BJP gains traction in Assam, hardliners in the BJP and the Hindu-nationalist movement that backs it, the Rashtriya Svayamsevak Sangh (RSS), could push a similar brand of anti-Muslim politics in West Bengal, a bigger state that also borders Bangladesh and votes in April and May.

Himanta Biswa Sarma, the BJP’s campaign manager in Assam, told Reuters that if the party is elected it will try to bar Muslims of Bangladeshi origin who entered India between its first census in 1951 and 1971, when Bangladesh became independent, from voting. They can stay but would have to re-apply for citizenship, he said.

The BJP’s campaign does not target millions of Hindus who have also left Bangladesh for Assam, or Muslims of Indian heritage. Modi’s government has also said it would welcome minorities from mainly Muslim Bangladesh and Pakistan, and could offer them citizenship.

“There are about 2 million immigrants (who came before 1971) and their descendents. Let them grow economically and educationally,” he said. “But their status should be refugee and, on the basis of individual application, if someone becomes an Indian citizen that’s a different issue.”

Dalits and Muslims: India’s favourites for the death penalty

Opposition to the BJP plan is vocal. At a rally this month in Jaleswar village, on the southern bank of the Brahamputra River upstream from the Bangladeshi border, leaders of a largely Muslim party likened themselves to Myanmar’s Rohingya minority.

The Rohingyas, many with roots in Bangladesh, are deemed stateless and have been excluded from the democratic transition in Myanmar. They have been targeted in attacks by hardliners from Myanmar’s Buddhist majority.

“We all know what has happened to the Rohingya Muslims. It could happen to us too,” Aminul Islam, a leader of the All India United Democratic Front (AIUDF), told the crowd. “There’s a conspiracy to disenfranchise 4 million of us. We will become stateless if we don’t come together.”

When Modi swept to victory in 2014, the election was marred by sectarian violence in Assam that killed more than 40 people.

During that campaign, Modi told illegal immigrants in states bordering Bangladesh to have their “bags packed” ready to be sent home should he win.

“Their entire idea is to take over the state, suppressing our voice and suppressing our culture,” said Sarma. “That’s why this election will be a counter to that communal propaganda. We are all for Indian Muslims and they are with us.”