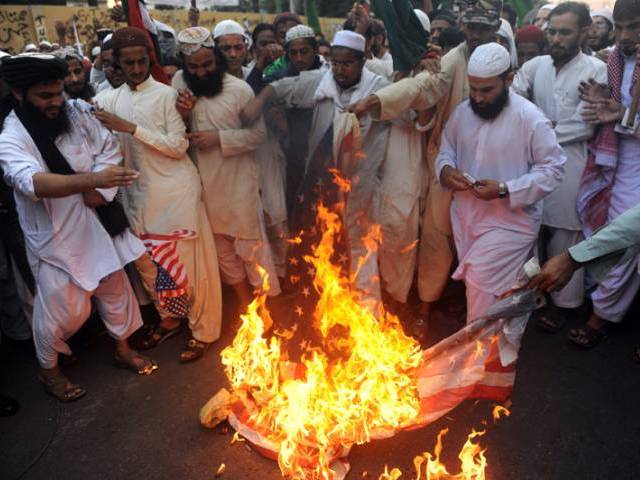 Pakistani Islamists burn US flags during a protest in Karachi on December 2, 2011, against the cross-border NATO air strike on Pakistani troops. PHOTO: AFP

Pakistan is in the process of banning Jamaatud Dawa (JuD), a charity that India says is front for the Lashkar-e-Taiba (LeT) militant group which is accused of masterminding the 2008 Mumbai terror attacks.

“There are some legal issues [to put JuD on the fourth schedule of the Anti-Terrorism Act] but we are getting there,” Interior Minister Chaudhry Nisar Ali Khan told lawmakers in the Senate.

After addressing some legal complications, as soon as the group is proscribed, it would automatically be put on the fourth schedule (which restricts movement of those on the list), he said in response to a query by PPP Senator Farhatullah Babar.

Replying to Senator Mushahid Hussain Sayed, Nisar confirmed intelligence-sharing with India on 10 to 15 boys crossing the Pakistani border into India.

He said actions of some ‘non-state actors’ create problems for the country and its institutions. “We are trying to get rid of such elements on both civil and military level.”

The statement comes days after Pakistan’s National Security Adviser Lt Gen (retd) Nasser Khan Janjua shared intelligence with his Indian counterpart Ajit Doval about a possible terror strike in the Indian state of Gujarat, which was put on high alert on Saturday after reports of 10 to 15 militants entering the country. The terrorists were said to be associated with the LeT and Jaish-e-Muhammad militant groups.

During an intensive interaction with lawmakers in the Senate on the performance of the government as regards implementing the National Action Plan, the security czar made new revelations and also put questions to the PPP lawmakers.

“You [the PPP government] did not take any action against the group [LeT] following the 2008 terrorist attacks in Mumbai. Now it [the group] is proscribed,” said Nisar. “We [the PML-N government] have introduced the concept of fourth schedule and maintained record of the same. We are now monitoring bank accounts of fourth-schedule suspects, their arms licences, driving licences and job status.” He claimed that during the PPP’s tenure, a proscribed person had performed Umrah.

Jamaatud Dawa not linked to LeT, won’t be banned: govt

Nisar said that because of weak prosecution and investigation, all 33 cases against Lal Masjid cleric Maulana Abdul Aziz were dropped.

The minister claimed that Aziz’s acquittal in all the cases was facilitated by the President House, referring to PPP Co-chairman Asif Ali Zardari’s tenure as president.

Out of 33, some 11 cases were heinous, including the murder of an army officer. In three cases, Aziz was fined Rs45 each, Nisar disclosed the official record. “The police told me that under the policy of appeasement, all these cases against Aziz were not investigated.”

He claimed that during the PPP’s tenure, the cleric was first moved to another city, and then to a villa. “But I’ll not name the villa,” Nisar told the PPP senators.

He added that when the PPP was in power, a 20-kanal land was provided to the Lal Masjid in Islamabad’s H-11 sector.

Nisar said it was up to the house to decide who actually was soft on Maulana Aziz. “Is it our government or those who gave him safe passage in all the cases?”

He also criticised civil society, saying that it was inappropriate for some 15 to 20 people from Karachi to come to Islamabad and try to provoke the Lal Masjid cleric. “Yes, we were soft towards these civil society members and did not take action against them.”

Regarding the National Counterterrorism Authority (Nacta), the minister said the body was functioning independently. The interior ministry is not overseeing the financial or administrative issues of the body, he said in response to Senator Babar’s question.

Nisar also responded to Babar’s criticism of the paramilitary Rangers, who are conducting a targeted operation in Karachi since September 2013.

JuD not a terrorist organisation, no reason to ban it: PML-N minister

He said it was the Sindh government’s claim that 79,000 people were arrested by the police and Rangers and then 78,000 were released. “The Rangers did not compromise in any case; it was the Sindh police that made these arrests and then prosecuted these suspects.”

On the subject of the Islamic State, also known by its Arabic acronym Da’ish, the interior minister said more than 40 groups were operating in Pakistan.

He said the militants associated with the group were fighting for their lives in Middle Eastern countries and northern Africa. “Why are we diverting their attention towards Pakistan?” he said while criticising those who insist on Da’ish presence in Pakistan. “We are monitoring the militant groups and are aware of all threats.”