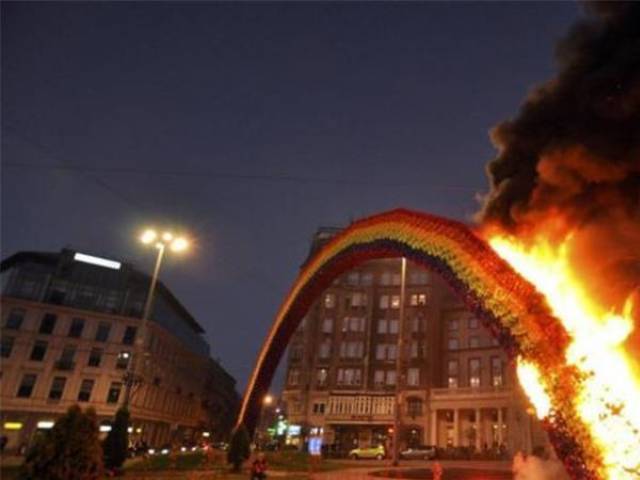 A rainbow installation in Warsaw symbolising diversity was set on fire by far-right demonstrators. PHOTO: REUTERS

WARSAW: Poland’s human rights commissioner has condemned a “growing number” of attacks on LGBT groups, calling for changes to the law to protect sexual minorities.

The Campaign against Homophobia (KPH) and gay-rights group Lambda say their offices have been targeted with break-ins in recent months, with anti-gay and nationalist slogans left on the doors of the latter.

“I strongly condemn the attacks on non-governmental organisations which are working to support lesbian, gay, bisexual and transsexual people,” said Adam Bodnar, who was last year appointed commissioner for human rights by the Polish senate.

“I note with concern the growing number of attacks on NGOs working to protect human rights and fundamental liberties, as well as battling hatred,” he said on Saturday following a meeting with the groups.

Bodnar added his regret that Poland has no laws against inciting hatred on the grounds of sexual orientation or any compulsory anti-discrimination classes in schools.

A spokesperson for the ruling Law and Justice (PiS) party said via a statement on a website for civil society and equality that it condemned “these sort of actions and any sort of violence”.

Poland is one of Europe’s most devout countries. Ninety percent of residents identify themselves as Roman Catholic, though ever fewer are heading for the pews on Sundays.

EU to push Turkey to take back migrants on ‘large-scale’