Searching for catharsis in Tatara

Searching for catharsis in Tatara 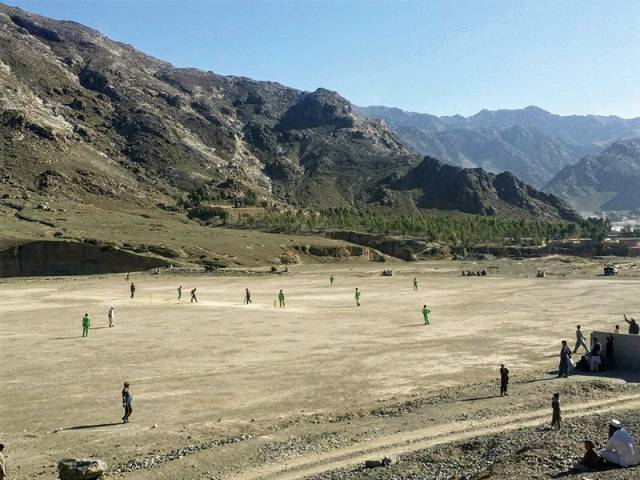 If you search for images of Tatara Football Ground in Landikotal on the internet, you will find photographs of a rough and jagged terrain surrounded by treacherous hills.

However, such images belie the significance of this playground in keeping sports alive in the region. For decades, young people have played cricket and football at Tatara Football Ground. Even during turbulent times when security situation in the agency deteriorated, children and aspiring sportsmen have thronged this field all kitted up to play matches.

Tatara mountains: Businessmen fight their own battle for modernity

For 16-year-old Shahenshah Afridi, Tatara Football Ground was where he was able to hone his skills on the cricket pitch. His talent and passion for the game took him from Landikotal to Australia. A left-hand batsman, Shahenshah was the part of the Pakistani under-16 cricket squad which defeated the Australian team on home ground in 2015.

Riaz Afridi, his elder brother, who grew up playing cricket on the same ground, has emerged as a prolific sportsman who has played for the national cricket team (around 2003 and 2004).

Cricket through the ages

Khyber Agency has been ravaged by militancy but locals remained steadfast in their passion for cricket and football. Two month-long tournaments at Tatara have been held since 1983.

According to Shahenshah, he has never been discouraged by the deteriorating security situation and has continued to play cricket against all odds. During the cricket tournaments, thousands of people gather at the ground to watch the game. If they cannot find a place to sit on the bleachers installed next to the ground, they squat on large rocks at the foot of the hills and cheer their teams on. As players from the local team hit a six in a match on Wednesday, the audience breaks into rowdy applause.

Over the years, the tournaments have become a crucial part of life for young people in Landikotal. At least 52 teams from Khyber Agency and two teams from Afghanistan are participating in this year’s cricket tournament.

Another direction: Khyber Steam Safari train resumes its magic after 2007

Rehman Afridi, the organiser of the tournaments who is also a football coach, told The Express Tribune, players who visit the area to participate in the tournament are treated like guests and provided accommodation.

“Villagers contribute towards their expenses and ensure the event is a success,” he said. “We have been holding these tournaments for several decades because of our love for sports.”

Rehman said locals are not in a position to bear the cost of maintaining the playground. “We would need to get soil for the cricket pitch from Gujranwala,” he said. “However, we cannot bring it to Landikotal due to lack of resources.”

According to Rehman, there is neither a roller to make a cricket pitch nor a net to make a goal post to enable young people to play football.

“We need soil and grass to smooth the jagged surface,” Rehman said. “We can’t afford any without government support.”

“Football is our traditional game,” Najeeb Afridi, president of the local football association said. “Over 30,000 people participate in a football tournament held in Landikotal every year. Moreover, players from the region eventually join football clubs in the country.”

Najeeb added Landikotal has produced a large number of sportsmen and a sports complex should be established there. “Politicians and government officials have promised to establish a sports complex in Landikotal, but have never acted on their words,” he added.

According to Najeeb, the political administration has the sports complex marked on a map for the tehsil. “However, plans to establish it have not materialised,” he added.

According to Muhammadullah, who has been selected in Pakistan Disabled Cricket Team, these sports can “foster unity in a country badly affected by war”.

“Sports are a balm for tribespeople,” he said. “We don’t have any entertainment facilities. All we have unrest. Sports gives life continuity.”

Muhammadullah added, “We have a number of players who are differently-abled and have played at Tatara Football Ground.”

Asad Afridi, who has played in the team in India, said, “Every time I see young people play on the ground, I forget my woes. This playground is the only source of catharsis amid instability and uncertainty.”