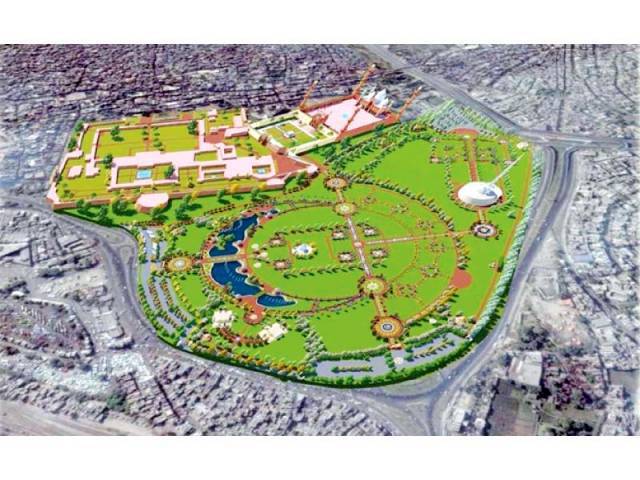 A bird’s-eye view of the project’s master plan with the Lahore Fort and the Badshahi Masjid in the background. PHOTO: PHA

Ahmad told The Express Tribune that the authority was aiming to finish the project during the current fiscal year. The provincial government had earmarked Rs1.335 billion for the project in a meeting of the Provincial Development Working Party. Ahmad said the initiative was a project of national significance.

Four statues of national heroes Quaid-i-Azam Muhammad Ali Jinnah, Allama Iqbal, Fatima Jinnah and Sir Syed Ahmad Khan will be placed at the venue. The project also includes renovating and preserving Minar-i-Pakistan and expanding Minto Park by incorporating space from the Circular Gardens and the carriageway between the minar and the Lahore Fort. Thematic food courts depicting the culture and heritage of all four provinces and that of Gilgit Baltistan (G-B) will be established there under the project. The park will also feature elaborate walkways and manicured gardens.

A museum will also be established to highlight the struggle and sacrifices rendered by Muslims over the movement for Pakistan. It will also highlight the culture and heritage of Lahore. The Authority will install a state-of-the-art illumination system and fountains there. The park will be equipped with a cutting-edge surveillance system which will enable authorities to monitor its each and every nook and corner.

From an architectural perspective, the design for the project originated from the idea of revamping the area to create a welcoming environment in the environs of the city’s densely populated areas.

The design envisages a rational division of available land into distinct zones that will accommodate all public and recreational facilities. The design is based on the national symbols of the crescent and the star. These forms symbolically depict a mother and the child in the form of Pakistan and its provinces.

The garden incorporates formal motifs from Mughal design such as fountains, pavements, a baradari and geometric patterns. Work on the project was originally slated to commence in 2013-14 but was postponed due to paucity of funds.

‘There are no personal laws for Kalasha community’