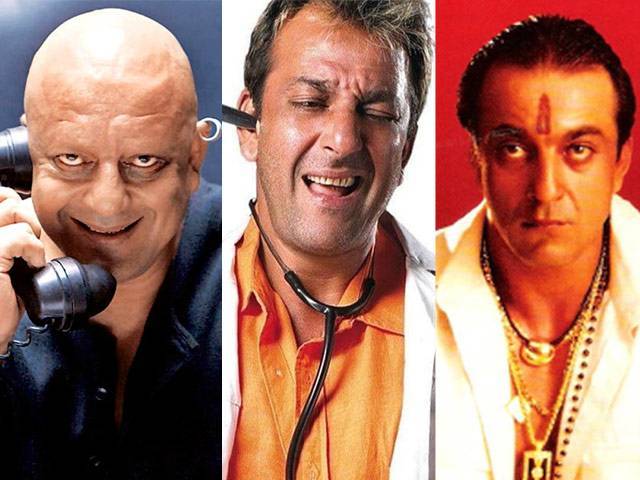 Now that the Bollywood actor is jail-free, we realise how much we actually missed him. Only a few actors manage to leave an impact on the audience and Sanjay Dutt is one of them.

He delivered countless memorable films to date, from his early movies like Saajan (1991) and Khalnayak (1993) to his later films like Munna Bhai MBBS (2003) and Agneepath (2012), we can’t imagine any without him.

Rocky was Sanjay’s debut film that kick started his career. He played the role of a son who sets out to avenge the death of his father. Although the film didn’t become a hit at the box office, it was the ninth highest grossing film of 1981.

Kya Yahi Pyaar Hai was a favourite number from Rocky:

Playing a contrasting role to previous ones, Sanju took on the role of a romantic poet who falls in love with Madhuri Dixit. Plot twist: Salman Khan, his best friend, also has feelings for Madhuri. However, Madhuri’s love lies with Sanjay and the two get together by the end of the film.

One of the hit songs from Saajan, Dekha Hai Pehli Baar:

Sanjay could hardly escape villainous roles, as he took on the role of the antagonist in Khalnayak. In the film he plays a criminal named Ballu.

Box office India declared the film a blockbuster at the box office and it was ranked as the 17th highest grossing Hindi film of all time in the May 2013 celebrating 100 years of Indian Cinema edition of Filmfare magazine.

We can’t imagine a better hero to save Kajol in this Hindi remake of English film, Eye for an Eye. Though Sanjay didn’t have too much screen time in the film, he won hearts over as Kajol’s lover.

The film was well received by critics as well as at the box office and was the seventh highest grossing Hindi film of 1998.

Who can forget Raghu’s famous line, “Asli hai asli … pachaas tola, pachaas tola… kitna, pachaas tola,” from the movie that took Sanjay’s career to new heights. The film is said to be loosely based on the life of a famous Mumbai underworld gangster.

Vaastav was very well received by both critics and audiences and is the second highest grossing film of 1999. It is often regarded by many as one of Sanjay Dutt’s best performances.

Our top 20 all-time favourite Bollywood songs from the 90s

Iconic duo of Sanyay Dutt and Govinda can never fail to pack a punch. In this comedy, Sanjay took on a lighter role of Govinda’s brother and didn’t fail to make us laugh.

Haseena Maan Jaayegi went on to become the fifth highest grossing Hindi film of 1999. And of course, the title track won everyone over.

Sanjay-Govinda’s jodi was such a hit the first time around that there had to be another film featuring the comedy duo and Jodi No 1 was just it. The two are shown as good friends and partners in crime in the film, hence the title.

Box Office India declared the film a super hit at the Indian box office. It was the fifth highest grossing film of the year.

Resuming his role as a gangster, Sanjay Dutt, plays Jay Rehan aka Ajju in Kante. The film centers around six men who come together to steal money in the hopes of overcoming their individual problems.

Tarantino has been quoted as saying that Kaante is his favourite film among the many rip-offs of his movies. It was the most expensive Indian film ever produced at its time of release and became the second highest grossing Hindi film in 2002. It was only given a semi hit verdict due to high production costs.

Children and adults alike raved about this film, and couldn’t get enough of Sanjay as the ‘doctor’ with a heart. Shown as a total goon in the hospital, Sanjay cheats his way into med school and falls in love with the Deen’s daughter.

While he never becomes a real doctor in the film, his jadoo ki jhappi treats all those with broken hearts.

It won several awards and was declared a blockbuster at the Indian box office and achieved silver jubilee status (25 week run), making it one of only eight films to have achieved this status since the year 2000.

Song Subha Ho Gai Mamu is a favourite across the board.

A remake of the 1990 film of the same name, Agneepath sees Sanjay Dutt and Hrithik Roshan in lead roles, playing the antagonist and protagonist, respectively. If Sanjay didn’t manage to freak you out in his earlier roles, this one sure does the trick.

Sanjay, who is the son of the village head, plans to start a drug mafia and manipulates the villagers to give up their land to him on lease. One schoolteacher, who opposes him, is brutally killed and framed for a murder by Sanjay. The schoolteacher’s son then plots to take revenge for his father’s murder.

The film broke the highest opening day collections record in India and became a major critical and commercial success. It has since emerged as one of the highest grossing films of all time in Bollywood.

That’s the film which had the hit item song Chikni Chameli.