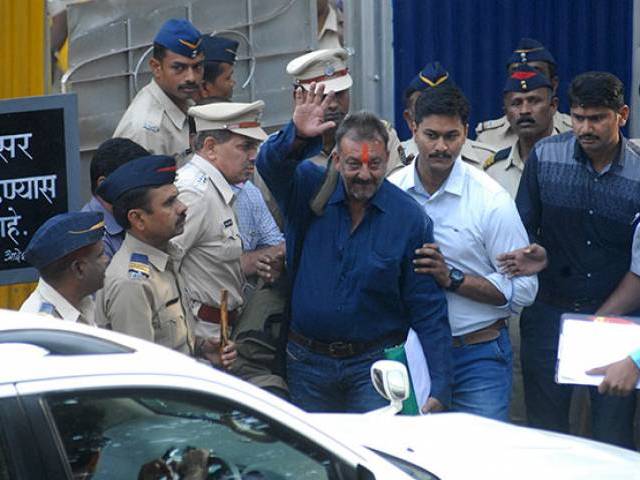 MUMBAI: Bollywood actor Sanjay Dutt was released from prison on Thursday after serving about four years for possessing weapons supplied by gangsters behind a series of bomb blasts in Mumbai in 1993.

The disgraced star kissed the ground as he walked free from the jail in the western city of Pune, after authorities decided to release him ahead of schedule for good behaviour. Facing a crush of police and media outside Yerwada Central Jail, the 56-year-old was bundled into a white SUV and driven away.

“I am out here because of their (fans’) support. There is no easy walk to freedom, my friends,” the 56-year-old later told media waiting at Pune airport.

Dutt was originally sentenced to a six-year term after being convicted in 2006 of possessing guns supplied by mafia bosses who orchestrated the series of bombings in Mumbai that killed 257 people.

He spent 18 months in prison before being released on bail in 2007, pending an appeal.

In March 2013, the Supreme Court upheld his conviction but cut his prison term from six years to five.

Dutt was later granted four extra weeks of freedom to work on unfinished movies and went back to jail in May that year to serve the remaining three-and-a-half years of his sentence.

He shot to fame in the mid-1980s in a string of action movies in which he performed his own stunts, earning him the nickname “Deadly Dutt”.

He is best known for playing a mobster with a heart of gold in the popular “Munnabhai” series.

There is no easy walk to freedom, my friends: Sanjay Dutt at Pune Airport after his release from Pune's Yerwada Jail pic.twitter.com/r2FLyWybqR

The 1993 attacks were believed to have been staged by Muslim underworld figures in retaliation for religious riots in which mainly Muslims died, following the razing of an ancient mosque at Ayodhya in Uttar Pradesh state.

Dutt was found guilty of possession of an automatic rifle and a pistol, which he insisted were only meant to protect his family in the tense atmosphere in Mumbai following the mosque’s destruction.