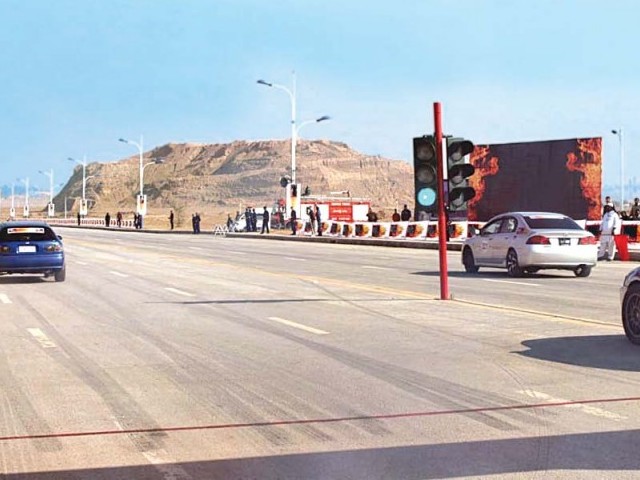 ISLAMABAD: The Bahria Town car race debacle took a new turn on Monday when the Supreme Court was told that Regional Police Officer Rawalpindi, Hamid Mukhtar Gondal, was the main obstacle in arresting the accused.

On being questioned about the authenticity of the information, Haris replied that Rawalpindi police officials had themselves disclosed it to him.

Moreover, he said that Malik Riaz’s son Ali Raza, who is the Chief Executive of Bahria Town, could not be arrested because he had protection in the form of bail from Sindh High Court (SHC). The court termed the move illegal and set aside the bail.

The court expressed surprise and questioned SHC’s relevance to the case. “How can the SHC grant protective bail to Ali Riaz when the incident had taken place in Rawalpindi,” Justice Ramday said. “This is highly illegal and no one can be allowed to make a mockery of the case,” he added.

Following the apex court’s order, the investigation officer, Major (retd) Mubashar, who was appointed by Inspector General (IG) of Punjab to probe the tragic incident of December 5, told the court that the “police was not cooperating.”

Chief Justice Iftikhar Muhammad Chaudhry asked Mubashar to report to the IG Punjab over the lack of cooperation. The court also questioned the advocate general over his failure to intervene in a timely manner.

Five spectators lost their lives in the fatal car race held on December 5, 2010 in Bahria Town. After the SC intervention through a suo motu notice, the city police officer Rawalpindi, who was incumbent at the date of the incident, was removed but no further inquiry could be held against his alleged role in giving a green signal to the race.  The court also questioned the Advocate General of Punjab for not trying to get Ali Riaz’s bail revoked. Haris tendered his apology before the three-member bench.

However, Haris claimed before the court that considerable progress had been made in the case. To this the court asked, “What action has been taken against the then City Police Officer Wisal Fakhar Sultan Raja, who allowed the race to be organised.” Haris said that it was a mistake on the part of a Special Branch official, who failed to mention the repercussions of the event in the Daily Situation Report.

Justice Ramday, in his response, said that the Special Branch official was not supposed to write anything else. “He was just supposed to give information about what was going to happen,” he said. The court asked Haris to ensure the arrest of the accused. Haris sought 10 days from the court in order to ask the government to arrest Sheikh Aatif, the event’s main organiser, through International Police. The court adjourned the case till January 28.

The court also asked Malik Riaz to respect the law and handover his son to the court in the broader interest of justice. Justice Ramday remarked that it was not fair to submit a reply in the court in favour of the accused son.

Harris also informed the court that the main responsibility fell upon Walid Awan, senior marketing manager of Bahria Town, Atif Sheikh, organiser, and Colonel (retd) Rafaqat, security officer of Bahria Town, because they did not take the necessary action to stop the drag race when no permission was granted by the competent authority, which is the District Coordination Officer.

He further told the court that Atif Sheikh fled the country from Peshawar after getting bail. The advocate general said the police had arrested Walid Awan, Majid Naeem, who was the driver of the car that killed the five spectators and Adil Naeem, who is an employee of Bahria Town management. However, the SC ordered the advocate general to arrest the main culprits instead of nabbing the guards or other low-ranking officials.