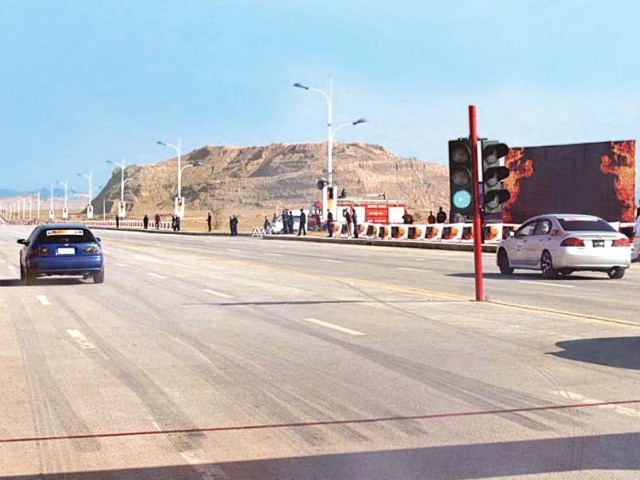 Participants of the drag race zoom away from the start line on Sunday. PHOTO: APP

RAWALPINDI: Five spectators of a drag race were killed when one of the sports cars skidded off the road and ran them over. A woman and a minor child were also injured in the incident, which took place on Sunday in Phase VIII of Bahria town, a posh locality in the outskirts of the twin cities.

Driver of car number 707, Muhammad Majid Khan, who is also the senior manager of a national telecom giant, managed to escape from the scene with a few injuries, said police.

It was not clear if the race was legally organised or not. The Rawat area police denied having given permission to the telecom company to organise the race. The company officials, however, had somehow managed to obtain a No Objection Certificate (NOC) from Bahria Town management.

“A copy of the NOC was sent to the police station after we had rejected their application seeking permission to hold the race,” said a police official.

Witnesses told the police that the speeding driver had lost control of his car, and was trying to reduce speed by grazing it along the footpath. However, he failed to regain control and after hitting the footpath, the car skidded straight on to crush the spectators.

Four people Daniyal Khan, Babar Khan, Sohail Khan and Colonel (Retired) Mohsin Khan died on the spot, while Asfand Yar was pronounced dead upon reaching the hospital. A woman Jamana Khan and a minor child Hamza Iqbal suffered injuries and were shifted to the nearby Safari hospital.

Talking to The Express Tribune, Commissioner Rawalpindi, Zahid Saeed said that the race was illegally organised.

“After they were refused permission, the organisers informed us that the race would be held in the jurisdiction of Islamabad and not Rawalpindi but then they did it in the latter,” said Saeed.

Police said cases were registered against the driver of the car, the Bahria Town management, and the chief organiser of the race, Sheikh Atif, who had managed to escape.

Commissioner Saeed said that strict action would be taken against everyone found involved in organising or executing the race. The race was allegedly sponsored by the leading telecom company but no spokesperson was available for comments.

In a drag race, two challengers race down a straight road. Usually, light sports cars fitted with powerful engines are used. Winning the race requires being able to change gears quickly and smoothly at the perfect time (depending on the optimum revolutions per minute (rpm) of the engine). Since the cars normally speed down a straight road, spectators feel safe standing just on the side and watching the events unfold at relative proximity. Drivers are required to keep a close watch on their rpms, turning and manoeuvring skills are not tested. Majid, however, managed to lose control over his vehicle and drove off the track. Because the car was at a high speed, the spectators did not have any time to move out of the way or run for safety.

“The car was completely smashed,” said police. Rawat police were on the look out for Sheikh Atif and Majid Khan. However, no arrests were made till the filing of this report.