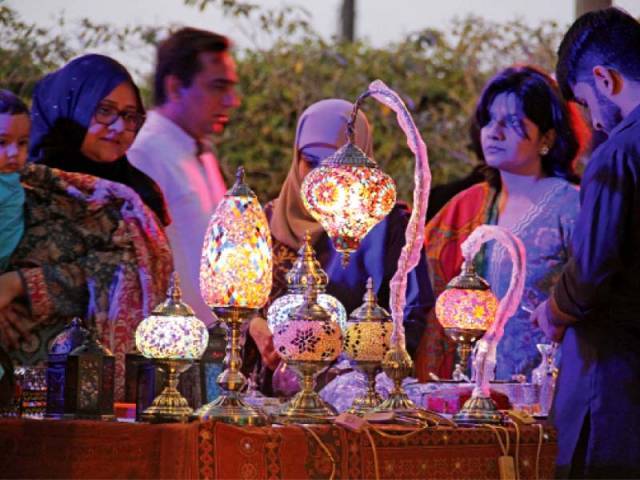 Several stalls have been set up at the festival where people can shop for jewellery, carpets, lamps and Turkish ceramics. PHOTOS: AYESHA MIR/EXPRESS

KARACHI: There is little Turkish grandness in the three-day festival that opened its door to Karachi on Friday evening but traces of Turkey can be found along the one-kilometre harbour front.

The first Grand Turkish Festival kicked off at Port Grand, offering a variety of Turkish food and entertainment.

“We are here to celebrate the friendship between Pakistan and Turkey,” said Turkish consul-general Murat Mustafa Onart at the inauguration ceremony. The festival has been put together by the Turkish consulate, with the help of Turkish Airlines, to bring the rich and diverse culture of Turkey to the people of Karachi.

Stroll through Istanbul in Karachi this weekend

Several stalls have been set up at the festival where people can shop for jewellery, carpets, lamps or Turkish ceramics. One of the highlights from the first day of the festival was a whirling dervish dance performance. However, the performers were Karachi residents dressed up as dervishes.

Turkish band Sultanat gave an enjoyable performance against the harbour’s backdrop. A group of artists had dressed up as the cast of Turkish television drama, Mera Sultan, and were roaming around the festival taking pictures with fans. A huge panaflex of the Blue Mosque was also draped on a wall, serving as a photo backdrop.

Pakistani band, Fuzon, has also collaborated with the organisers and is performing on all three days. “Turkey is part of our common cultural heritage,” said Fuzon band member Imran Momina aka Immu.

The Motor Club of Pakistan, who had organised a Turkish friendship rally from Pakistan to Turkey via Iran, have also set up a display of vintage cars. They are offering short rides to the visitors as well.

“We only had very good experiences with all the people we met,” said the club’s marketing director, Abdul Basit Khan, referring to the 32-day trip in which they covered 5,000 kilometres of a scenic route to Istanbul.

The aim of the Turkish friendship drive was “to portray a positive image of Pakistan and to promote tourism within the three countries,” said Nadeem Ahmed, the sales head of Team Nayyer, which oversees the motor club. Port Grand CEO Shahid Feroz hoped the festival will attract more people on later days. “We are expecting over 60,000 people to experience this extravaganza amid the safety, security and beauty of Port Grand,” he said. On the last day today, the festival will start at 5pm and end at midnight.

A festival spokesperson shared they are already looking forward to holding the same festival next year. “We are hoping this event to be a catalyst to further improve the relations between Pakistan and Turkey,” he said at the inauguration ceremony.

CBC goes back on promise by shooting two sleeping dogs