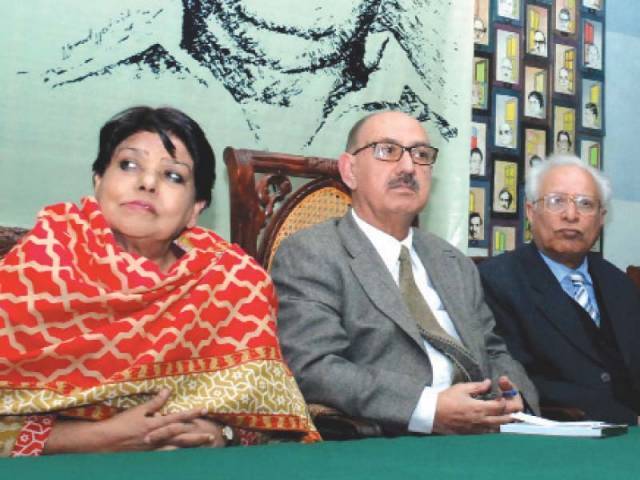 ‘Intizar Husain Award’ will be instituted in recognition of his contribution to literature. PHOTO: MUDASSAR RAJA/EXPRESS

ISLAMABAD: Writers, academics and journalists showered praises on Intizar Husain, one of Urdu fiction’s iconic and most prolific writers at a literary reference at the Pakistan Academy of Letters here on Tuesday. They shared their fond memories with the novelist who passed away early this month.

The void created by Husain’s death could not be filled for decades to come, Prime Minister’s adviser on National History and Literary Heritage Irfan Siddiqui said while speaking as chief guest at the event.

“We will have to wait long for another Intizar,” he commented. “The purity, calmness and spirituality in his writing are unparalleled,” he added.

He also announced that the government will introduce ‘Intizar Husain Award’, to be given every year in recognition of his contribution to Urdu literature on fiction.

Poet Kishwar Naheed recalled her fond memories with Intizar sb spanning over 50 years and said that whether it was his encouragement of her poetry, or hosting his wedding reception with other writers.

“Intizar sahab would often say that we are surrounded by religious extremists while the women writers are defending us. The desire to write about him will always live inside me,” she said.

Poet Sarwat Mohiuddin remembered how Kishwar had introduced her to Husain. “Kishwar took me to Intizar sahab’s home to gift him my first poetry book in Punjabi and it was his greatness that he decided to do review of the book in English for a leading newspaper,” she said.

Professor Fateh Muhammad Malik said that Intizar Husain’s writings will be a gift for the writers of all ages.”

Muhammad Hameed Shahid said that, Intizar Husain was the last to write in pure Urdu tradition. With his powerful fiction along with the tradition, he made the past as the part of future.”

PAL chairman Dr Qasim Bughio said Intizar has given a new diction, themes and thoughts to the Urdu literature. He carved a niche for himself in literature and journalism.

“As a language, Urdu should be proud that a writer like Intizar Husain chose it to express his ideas”, said Bughio.

Professor Jalil Aali said that Intizar Husain was a tree of literature in whose shadow we all were sitting.”

Writer and PTV Chairman Attaul Haq Qasmi said it was a major misconception that Husain was against Partition of the Subcontinent. “He was indeed in favour of partition, and moved to Pakistan immediately after independence even though he believed in a secular Pakistan,” he shared.