Urdu may be unfortunate but it is most flexible: Arfa Sayeda Zehra

Urdu may be unfortunate but it is most flexible: Arfa Sayeda Zehra

Zehra was one of the panell­ists at a sessio­n on ‘Sarkar­i Urdu, Awami Urdu: the Offici­al Status of Urdu’
By Yusra Salim / Photo: Athar Khan
Published: February 7, 2016
Tweet Email 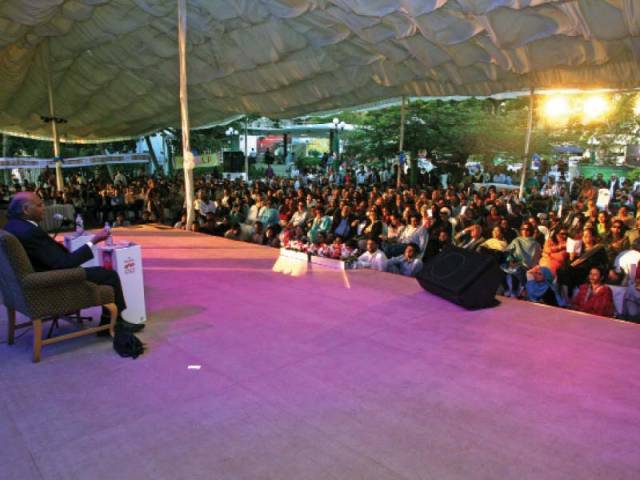 Urdu is a misfortunate language but it is also one of the most flexible languages, said scholar Arfa Sayeda Zehra, who explained how the language has whole heartedly merged words from different languages, such as Hindi, Farsi, Hindko and Turkish.

Zehra was one of the panellists at a session on ‘Sarkari Urdu, Awami Urdu: the Official Status of Urdu’ on the second day of the 7th Karachi Literature Festival. She was answering a question on how Hindi words are creeping into the dialogues of Pakistani dramas. Urdu accepts words from other languages, which is the beauty of this language, she said.

The problem here is not about the official or local languages but how to merge English and Urdu as one in the present state of the country, she said. “To understand the reasons behind the official status of Urdu, one has to go back and study the history of Urdu,” she said. “Language is the identity of the people and people of Pakistan are identified through Urdu,” she explained. Commenting on the Supreme Court’s order to implement Urdu as the official language, she said that the state never accepted Urdu’s identity. They say a lot but do nothing, she added.

Her fellow panellist, writer and journalist Masood Ashar, was of the view that issuing a notification or giving a decision can never work out in the country such as Pakistan. “Our corporate sector is in English and our youngsters will never go for Urdu if they get salaries for learning English,” said Ashar. Young people studying and focusing on Urdu do not end up with anything more than getting jobs in government colleges, he said. “Urdu cannot be accepted as the official language until we create good jobs for our youngsters [who focus only on Urdu],” he added.

Ashar regretted the decreasing importance of Urdu in the school curriculum. “In our times when we were students, English and Urdu had equal importance in schools,” he shared, adding that education develops the skills of language, etiquettes and writing along with good curriculum and way of teaching.

The third panellist Nasir Abbas Nayyar spoke about the difficulties in making Urdu the official language. There is an obvious divide in languages, the same as classes in the country, he said.