Pick up your litter: Young individuals endeavour to clean up the city

Pick up your litter: Young individuals endeavour to clean up the city 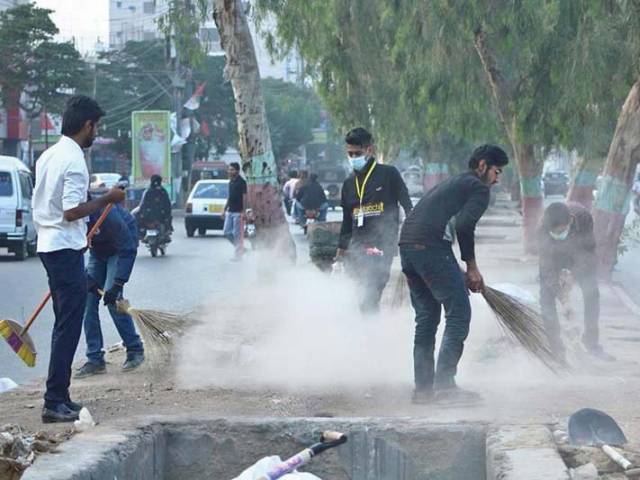 Every Sunday morning, the team collects donations from passing cars and residents, and then gets to work. PHOTO: COURTESY FACEBOOK

Tired of the sight of trash strewn across the roads and losing faith in the authorities, 60 young individuals have decided to take ownership of their city and launched a cleanliness campaign, ‘Saaf Karachi [Clean Karachi]’.

Every Sunday, the group meets to pick and choose an area after proper research, collect donations from residents, bring in the equipment and start cleaning the chosen area, which takes three to five hours.

The initiative was launched on January 10 this year and the group met to clean the median strip from Landi Kotal Chowrangi to Five Star Chowrangi, North Nazimabad.

“Initially, we cleaned the litter from just the median strip,” said Aquil. However, the next day the median strip was again filled with garbage as the area is teemed with eateries, he claimed.

“The next week, we again collected donations and cleaned the area and placed  litter bins,” he said, adding that they were assured by District Municipal Corporation’s (DMC) officer, Nadeem, that the trash from the bin will be picked up daily.

Every Sunday morning, the team collects donations from passing cars and residents of the chosen area. Then, they hire a Suzuki pickup and load it with the collected trash.

“If we are left with any money after hiring the pickup, we place trash bins and plant small trees, to give the area a neat look,” said Aquil.

Speaking about collecting donations, Suha said when residents see us cleaning, they are willing to give more.

“As a girl I have never faced any problem cleaning the roads of my city,” she pointed out, adding that peoples’ attitudes encourage her. Sometimes they also join us, she added.

When asked by The Express Tribune if they have sought any help from the government yet, the team said no.

Apart from Nadeem, no government official has helped us with our campaign, said Aquil. He requested Sindh Chief Minister Syed Qaim Ali Shah to at least provide them with the machineries to clean Karachi.

“Government has got the machineries but not the willpower,” he said, adding that they were ready to fill that gap.

According to Aquil, the team has a total of six divisions in the entire city, each headed by a leader.

Currently, the team has pockets in North Karachi, Malir, Gulistan-e-Jauhar, Federal B Area, and Gulshan-e-Iqbal.

“Our next target is 4K Chowrangi in North Karachi,” said Aquil, adding that they will also go to the Orangi Town for cleaning purpose.

The group maintains that they are apolitical and have not been contacted by any political party.

“We don’t want to divide ourselves, that is why we are not getting involved with any political campaign,” said Abbas.