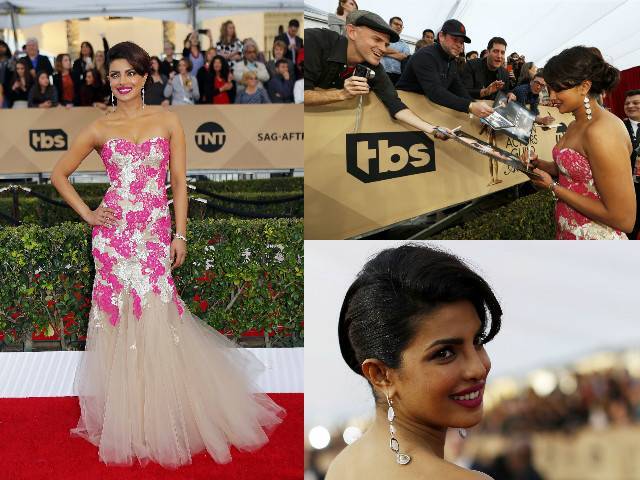 The annual award show took place at the Shrine Auditorium and Expo Hall on Saturday where Priyanka, 33, was a presenter. Priyanka, who rose to international fame after starring in American TV series Quantico, in which she plays the lead role of FBI agent Alex Parrish, shared her before-the-show look on Instagram on Saturday.

The photograph showed a closet full with a variety of heels. “Red carpet preparations! My favourite part. @sagawards looking forward,” she captioned the image. Designed by Monique Lhuillier, the strapless dress was covered with pink and white lace designs. The National Award winning actor completed her look with her hair in an amazing updo along with long teardrop earrings, and a simple bracelet.

During the award show, Priyanka was joined by Game of Thrones and Narcos fame actor Pedro Pascal. The duo presented the trophy for Outstanding Performance by a Male Actor in a Drama Series to actor Kevin Spacey for his role in TV series House of Cards. Bradley Cooper and Irina Shayk have not broken up, claims source