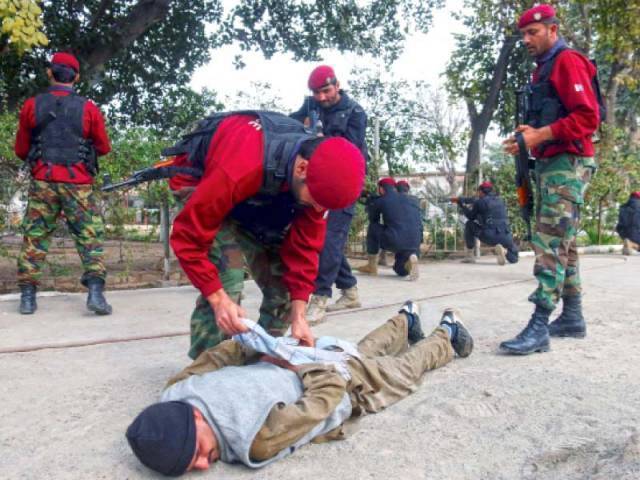 GILGIT: Security forces personnel carried out exercises at Skardu airport earlier this week to tackle any untoward situation on the facility’s premises.

“The purpose of the exercise was to assess the level of preparedness of the forces,” Obaid Abbasi, an official at Skardu airport, told The Express Tribune on Saturday.

The airport is the largest such facility in Gilgit-Baltistan. A large number of army planes and Pakistan International Airlines flights frequently fly to the airport.

“The full exercise was started without prior information to any force as we wanted to see how our law-enforcement agencies react to our SOS call,” he added.

The army, police, airport security force and rescue officials participated in the “surprise” exercises held on Wednesday. The exercise was carried out a day before the federal government issued a threat alert to the G-B government and asked it to enhance security at all major institutions.

During the mock drill, the forces were told that some terrorists had entered the terminal building and planned to break into the control tower.

As part of the exercise, a security alarm went on and within minutes Airport Security Force commandos cordoned off the main airport building and closed all the access points to the runway. The Quick Response Force, headed by the Brigade commander, Brigadier Ehsan, the commissioner, DIG police with a contingent, Rescue 1122 and city hospital ambulances reached the site. The building was then cordoned off and the ASF and commandos began rescuing people.

In light of threat alerts received from the federal government, G-B home department has asked the government departments to tighten security.

According to a letter issued by the home department, security will be revisited and improved for important buildings. As per the letter, the buildings include Governor House and Secretariat, CM House and Secretariat and Civil Secretariat, the DHQ hospital, airports, prisons, government offices, schools and colleges. “Security arrangements must be ensured as per the blue book, irrespective of whether the dignitaries are present at their offices or house or not,” the letter reads.

Four arrested for rape in Gilgit