Bollyw­ood actor says he is scared of being brande­d as BJP fanati­c
By Entertainment Desk
Published: January 30, 2016
Tweet Email 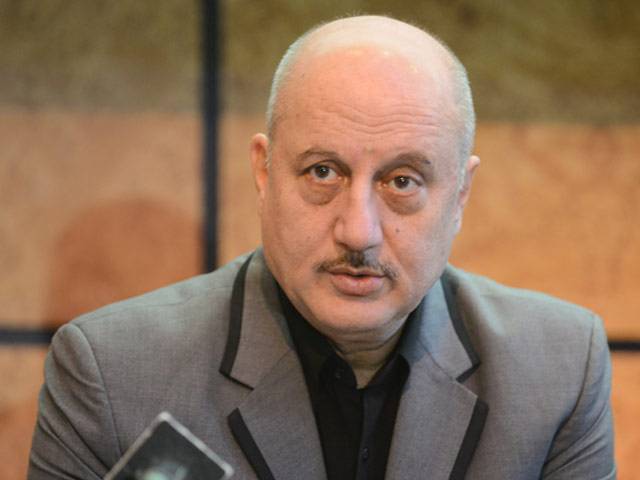 Have the tables turned? PHOTO: HINUDTVA.INFO

Veteran actor Anupam Kher has been on the forefront of the ‘anti-intolerance’ debate in India of late. He was also known for harshly criticising Aamir Khan for his statement on intolerance. Surprisingly, however Kher has now openly admitted to being scared of calling himself a Hindu in his own nation.

Have the tables turned?

In an interview with IBN Live, the actor confessed that he fears “saying I’m a Hindu”.

“In this country, I’m scared to say that if I wear a tilak (mark worn by a Hindu on the forehead to indicate caste, sect) and a gerua (saffron colored clothes), then I will be branded as an RSS (right-wing party) guy or a BJP fanatic,” said Kher.

And though he agreed that it is hypocritical on his part to keep flip flopping statements, the state of politics is such that it leaves him no choice.

People soon took to Twitter to express their sentiments regarding Kher’s statement.

Replace 'Hindu' with 'Muslim' and 'Anupam Kher' with 'Aamir Khan' and imagine the outrage. https://t.co/LCftzqacQr

Has Anupam Kher said any wrong about Hindu phobia? Not at all
How many times have Hindus been labelled communal by Cong for supporting Modi.

Until 2014 @AnupamPkher could proudly say that he is a Hindu, today he is afraid to call himself one. What has changed? #AskAnupam

And this isn’t the first time Kher has changed stance on a matter. He was recently called out on Twitter for his U-turn on the Padma Awrads — which he vehemently opposed in 2010, but reveled in the honour soon after being awarded one this year.

AWARDS in our country have become a mockery of our system.There is NO authenticity left in any one of them.B it films, National or now PADMA

Happy, Humbled & Honoured to share that i have been awarded The PADMA BHUSHAN by the Govt. of India. Greatest news of my life:) #JaiHind

The actor cleared the air and said that that was because at the time one of the chosen awardees had a history of criminal records and should not have been given the award.