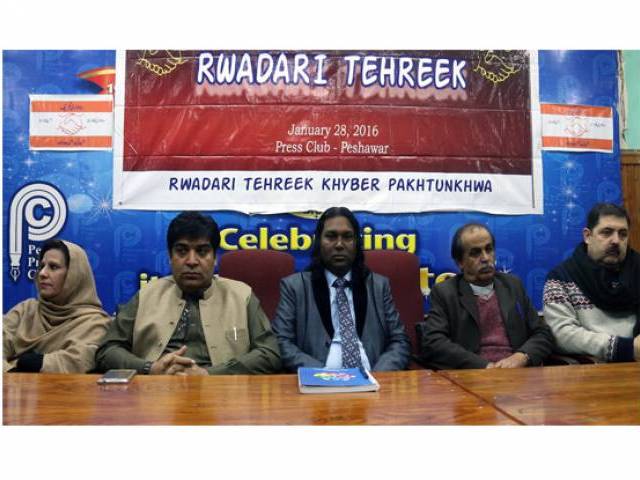 PESHAWAR: In a bid to counter religious extremism, intolerance and terrorism, social activists launched Rwadari Tehreek in Khyber-Pakhtunkhwa on Thursday. A social movement initiated by citizens, the Tehreek wants immediate and indiscriminate action to be taken against all militant groups across Pakistan so peace could be restored in the country.

The movement was launched at a ceremony at Peshawar Press Club and attended by people from multiple faiths. The participants expressed concern over the attack on Bacha Khan University and other incidents of terrorism.

Demanding an end to bloodshed in the name of religion, Rwadari Tehreek representatives said 2016 was the ‘Year of Rwadari’. The group will hold programmes across the country to end religious extremism, intolerance and terrorism.

Rwadari Tehreek Chairperson Samson Salamat said members from Punjab, Sindh and Balochistan stand united with the people of K-P. He added the loss of thousands of precious lives should be enough for the provincial and federal governments to ensure safety and security of the people.

Salamat added grievances of the people of K-P should be addressed and fairness should be ensured in the distribution of resources.

At the end of the ceremony, participants asked the government to make sure militants do not have access to educational institutions.

They asked financing of such groups should be strictly monitored. All those individuals or groups supporting militants and terrorists should be held accountable, said those at the launch.

Participants also demanded syllabi of educational institutions should be checked for hate material.

They urged the provincial government that those laws which are being misused to incite violence in society should be revised.

Up in arms: Protesters block KKH over relocation of bus terminal