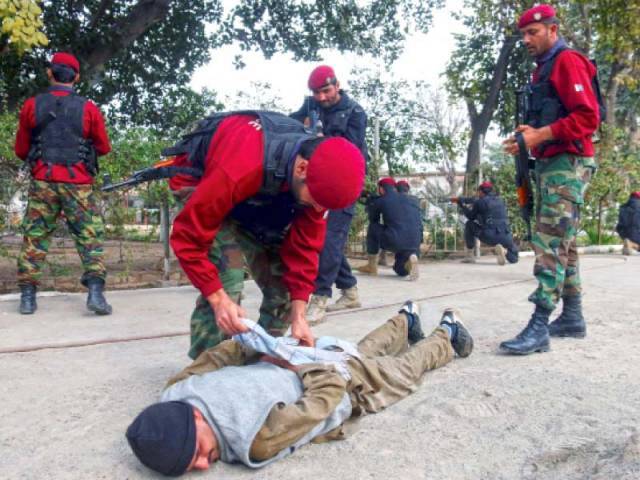 Man pins down a suspect as part of a drill at Elizabeth School in the city. PHOTO: MUHAMMAD IQBAL/EXPRESS

PESHAWAR: The Special Combat Unit (SCU) of the Capital City Police plans to conduct a series of mock exercises at educational institutes across the city to prepare students and teachers to deal with possible terror attacks.

The first exercise was held at Elizabeth School in Dabgari Gardens on Thursday. The exercise was planned for the girls section of the institute but was held at the boys school there as well. Students were briefed by specialists about steps to take in the event of a terrorist attack.

Another exercise will be conducted at Islamic College University on Tuesday and similar initiatives have been planned at schools and universities in Hayatabad.

Speaking to The Express Tribune, Cantt SP Kashif Zulfiqar said the SCU, which comprises 90 trained commandos, has been launched in Peshawar. He said the initiative will help assess the unit’s level of training and preparedness.

“In the event of an attack, the first response would come from the local police,” he said. “But [through these exercises], commandos will demonstrate how the site of the attack can be cordoned off and teachers and students can be safely evacuated.” He added the exercises will enable the unit to show its capabilities on how to deal with suicide bombers and a hostage situation. According to Zulfiqar, more exercises will be conducted to check the professionalism of SCU’s commandos. It will also ensure school administrations are in a strong position to deal with all eventualities.

“We are satisfied with the level of professionalism the commandos exhibited at Elizabeth School,” he said. Zulfiqar added, “The principal informed us there was a boys section on the premises as well. As a result, we conducted another exercise at the boys section and received a good response from the school administration.”

According to the Cantt SP, a series of schools will be identified in the future and mock exercises will be conducted at these institutes.

“We have a Rapid Response Force which comprises eight vehicles and the android-based SOS alert system,” he said. Zulfiqar added security arrangements at various schools have been reviewed and shortcomings have been identified.