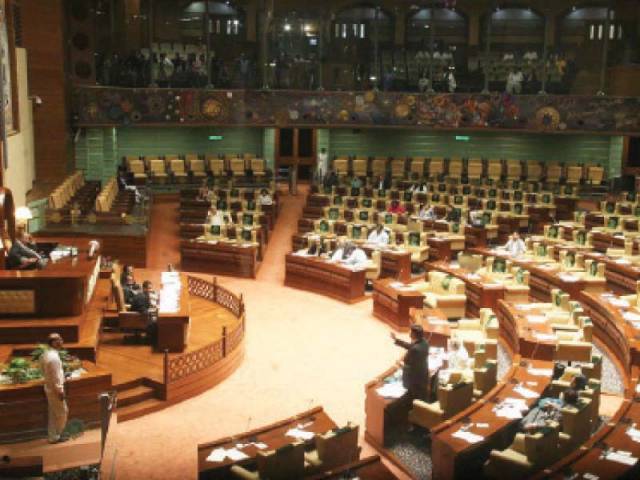 Lawmakers of the Sindh Assembly lashed out at companies such as the K-Electric, HESCO and SEPCO over long hours of load-shedding and overbilling across the province during the winters. PHOTO: ONLINE

KARACHI: The poor performance of electricity utilities in the province sparked a debate among lawmakers during the Sindh Assembly session on Friday.

Both the opposition and treasury members lashed out at power utility companies, such as K-Electric, Sukkur Electric Power Company (Sepco) and Hyderabad Electric Supply Company (Hesco), for rolling blackouts lasting up to 18 hours in parts of Sindh and overbilling. The government decided that it will raise this issue at the upcoming Council of Common Interest (CCI) meeting between all provinces.

The issue was raised by Pakistan Tehreek-e-Insaf (PTI) MPA Khurram Sher Zaman during the question-answer session. “Why is the government not taking action against these powers companies who have made the lives of people miserable?” he asked.

Finance and energy minister Murad Ali Shah responded he had written to the federal government to resolve the load-shedding issue in Sindh but he said the government has no authority over K-Electric, since it is a private company. “We held a meeting with the prime minister and offered to purchase Hesco and Sepco,” he said. A committee was formed on the prime minister’s recommendation but this issue is still pending, he added.

“These power companies have exceeded all records of generating inflated bills,” he pointed out, adding that Hesco and Sepco claimed that the Sindh government owes them Rs25 billion but he insisted this was false. “During our meetings the officials of these power utility companies had also accepted their fault and admitted to overcharging government institutions and consumers by as much as 50 per cent, which is not acceptable,” said Shah. Pakistan Muslim League-Functional MPA Nand Kumar used the word ‘blackmailing’ to describe the tricks used by power companies.

PTI’s Syed Hafeezuddin drew the attention of the legislators towards the suo moto action taken by the Supreme Court against the privatisation of K-Electric. “The then chief justice [of Pakistan] Iftikhar Chaudhry had taken notice of it,” he said. “No decision has been made on this petition. Why doesn’t the Sindh government pursue the case?”

The finance minister complained that the CCI meeting date has yet to be finalised even after 10 months. Shah elaborated that the provincial government has also implemented alternate sources of energy in various parts of Sindh. “We have provided the solar lights to 200 schools and two villages of Tharparkar district,” he said.

No more smoking for Khuhro

“Some section of the media caught me smoking inside the House,” said Khuhro at the start of the session, which was chaired by speaker Agha Siraj Durrani. “Even though the session was adjourned but I tender an apology on my mistake,” he said, adding that he had dared to smoke after 15 years but will give up smoking forever. Durrani appreciated Khuhro’s decision to quit smoking and told him he has done the same.

Meanwhile, the Muttahida Qaumi Movement (MQM) tabled a resolution to lift the ban on speeches made by MQM chief Altaf Hussain. Opposition leader Khawaja Izharul Hasan and Mohammad Hussain, both of whom belong to the party, took up the matter with the speaker by insisting on presenting the resolution in the House.  “There is no such precedent in any country,” said Hussain. “We want to know under which law the ban has been imposed.”

The speaker assured them that the resolution will be taken up but the session was adjourned till Monday before it could be adopted.

‘Bhutto was hanged for good work, not for his mistakes’