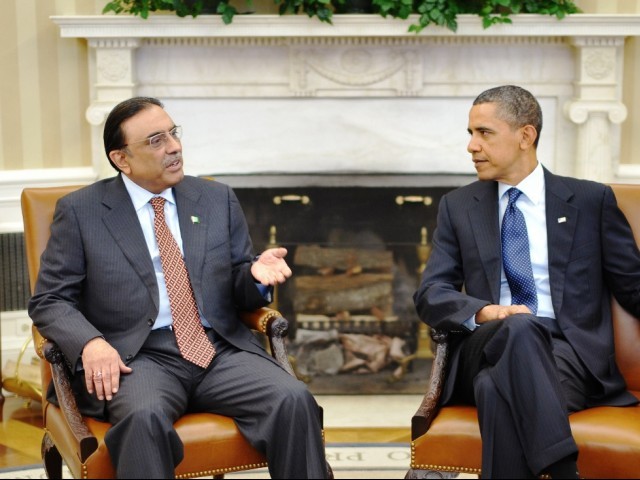 Pakistan President Asif Ali Zardari (L) speaks at a meeting with US President Barack Obama January 14, 2010 in the Oval Office of the White House in Washington. PHOTO: AFP

US President Barack Obama on Friday offered to look at new ways to help Pakistan’s troubled economy as he showed support for President Asif Ali Zardari at a White House meeting, officials said.

Zardari held a closed-door meeting with Obama after flying into Washington for a memorial service for Richard Holbrooke, the late US envoy for Pakistan and Afghanistan, which has been a top priority for the US administration.

Obama “underscored the importance of the US-Pakistan relationship and our continued support for Pakistan,” the White House said in a statement.

“The discussion focused on our shared efforts to fight terrorism and promote regional stability, specifically on the importance of cooperating towards a peaceful and stable outcome in Afghanistan,” it said.

In the talks with Obama and Secretary of State Hillary Clinton, Zardari also explained the “needs and requirements”  for Pakistan’s fragile economy, said Husain Haqqani, Pakistan’s Ambassador to Washington.

“President Obama and Secretary Clinton have said that the US will over the next few days find ways to strengthen Pakistan’s economic reform process, while taking into consideration social and political factors,” Haqqani said.

Haqqani said that Zardari expressed appreciation for assistance from the United States, which in 2009 approved a five-year, $7.5 billion package for the key but complicated war partner.

“Pakistan does not want to be a permanent recipient of aid. We want to be able to stand on our own two feet and for that we need economic reform,” Haqqani said of the White House conversation. But a bailout by the International Monetary Fund has hit a political roadblock in Pakistan.

Economic assistance was also a key item on the agenda when Vice President Joe Biden visited Pakistan and Afghanistan this week.

Obama and Zardari also touched on the assassination of Punjab Governor Salmaan Taseer, an outspoken liberal who had campaigned to reform the controversial blasphemy law which rights activists say has often been abused to target minorities.

Obama “expressed the view that he was, like many people around the world and in Pakistan, distressed by the reaction of some people in Pakistan who were reluctant to condemn that assassination,” Haqqani said.

“He appreciated the stance of the government of Pakistan in wanting to pursue the perpetrators of this crime as well as to continue to work toward building a moderate, democratic Pakistan, which is the strongest guarantee against the success of terrorists in our region.”

The Obama administration believes that efforts to bring economic stability and build democratic institutions are crucial in targeting Pakistan where some of the world’s most-wanted extremists are holed up.