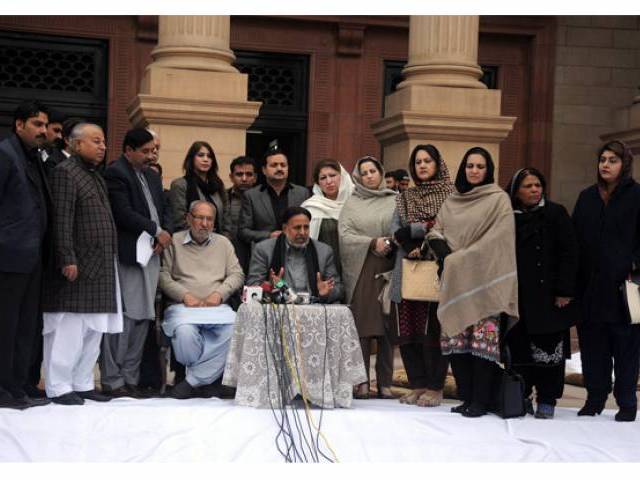 LAHORE: Several opposition members in the Punjab Assembly on Thursday held a ‘session’ on the steps of the Assembly Chambers to protest the  delay in convening a session.

The ‘session’ lasted only a few minutes. The members adopted passed a unanimous resolution condemning Wednesday’s attack at Bacha Khan University in Charsadda. As many as 19 members from the opposition benches attended the protest.

The session was called by Leader of Opposition Mian Mehmoodur Rasheed. Lawmakers sat on the stairs leading to the Punjab Assembly.

It was chaired by Syed Ejaz Hussain Bukhari, the Pakistan Tehreek-i-Insaf member from Attock. Pakistan Peoples Party (PPP) and the Pakistan Muslim League-Quaid (PML-Q) were represented but no one showed up from Jamaat-i -Islami. Though the session was called by PTI’s Mian Mehmoodur Rasheed, only half of the party’s representatives showed up. Independents MPAs Ehsan Riaz Fatyana and Ali Salman were also part of the session.

The participants offered prayers for those killed in the attack on Bacha Khan University on the request of MPA Arif Abbasi. Rasheed raised the matter of attack in Charsadda on a point of order.

A resolution condemning the Charsadda attack was also unanimously passed by the lawmakers. The resolution passed in the protest session was the same as the draft submitted to the assembly secretariat on Wednesday by the opposition leader.

The resolution expresses support for the ongoing operation against terrorism and demands that the federal and provincial governments ensure elimination of extremist outfits from the country. The session was prorogued indefinitely.

Later, talking to newsmen, Rasheed said the session was a symbolic protest against the government’s attitude towards the House.  He said the protest could have continued till an actual session of the assembly was called. “However, in deference to the national mourning in the wake of Wednesday’s attack, the protest session had to be called off.”Rasheed said he had been informed that a summary calling for a session of the assembly on January 29 had been moved.

“Our mission has thus been accomplished. The government is finally paying heed to our demands,” he said.

Commenting on an amendment to the Local Government Ordinance regarding introduction of secret balloting for the election of mayor and deputy mayors, Rasheed said he condemned the move.

The last session of the Punjab Assembly was held in November. It was prorogued the same day.