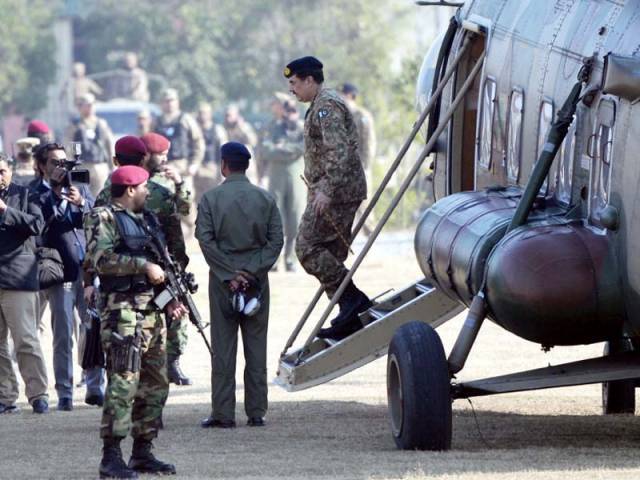 The Bacha Khan University attackers were in touch with their handlers during the assault, the chief military spokesperson said on Wednesday, adding that operations were ongoing to arrest their facilitators.

“The attackers were in touch with a number from Afghanistan,” Lt Gen Asim Saleem Bajwa, the director general of the Inter-Services Public Relations (ISPR), told a news briefing in Peshawar.

“The terrorists were continuously conversing on their mobile phones, two of which we have recovered and collected data from,” he added.

Lt Gen Bajwa said the SIMs used in the phones were of Afghan origin. He added that a mobile phone recovered from one of the attackers was receiving calls even after he had been killed.

The ISPR chief said that as many as 52 security personnel were present on the campus when the attack began. Some of these officials resisted the attackers which saved many lives.

Within 45 minutes, military troops from Peshawar had reached the campus in Charsadda and contained the terrorists in a building. “Some were killed on the stairs leading to the roof, others on top of the roof.”

While Lt Gen Bajwa expressed his reluctance to share details about the terrorists in public, he said information gathered from the terrorists had been shared with the National Database Regulatory Authority (NADRA) which had turned up important clues.

He added that based on intelligence gathered on the attackers, additional teams were carrying out intelligence-based operations in several places to apprehend the facilitators of Wednesday’s attack.

Providing details of the security conference at the Corps Headquarters chaired by Chief of Army Staff General Raheel Sharif in the presence of intelligence heads and the other top officials shortly after the attack, Lt Gen Bajwa said the leadership had expressed satisfaction on the operation carried by the troops especially given the time in which the forces managed to reach the university from Peshawar.

Asked whether there had been any specific threat against the university, the military spokesperson said he was not aware of such threats, but reminded that Operation Zarb-e-Azb was still under way and the entire country was still in a state of war.

Terming the attack as a sign of frustration of terrorists who had attacked a soft target, Lt Gen Bajwa said the national resolve had not been dented, rather the nation was united and that they “will be able to defeat terror”.

“We have to fight this war with unity, and every citizen and institution has to play their role in the eradication of radicalism.”

A guard, a professor and a heartbroken brother