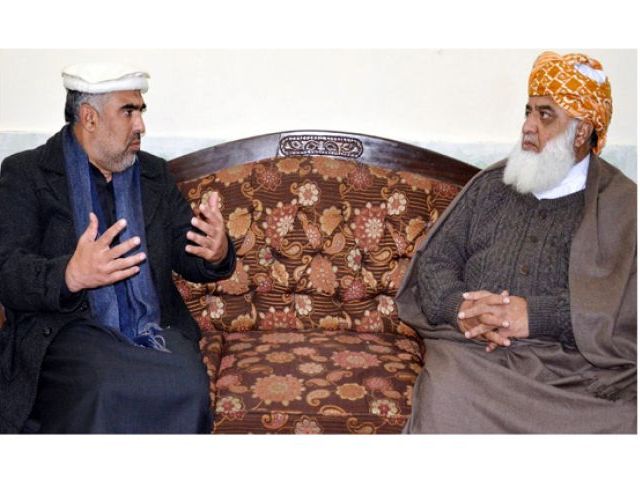 The Khyber-Pakhtunkhwa government intensified pressure on the federal government to secure the province’s share in the China-Pakistan Economic Corridor. Part of the efforts was a meeting with Jamiat Ulema-e-Islam-Fazl chief Maulana Fazlur Rehman on Sunday to gain his support.

The Pakistan Tehreek-e-Insaf-led regime has started visiting the political leadership in the province over the subject. K-P Assembly Speaker Asad Qaiser held a meeting with Fazl at the JUI-F Secretariat in Peshawar Sunday evening. Qaiser shared the provincial government’s stance over the matter and asked for joint efforts to secure K-P’s rights.

Political stability and the agenda of change

“We want Maulana Sahib to lead us in the matter and will meet all provincial leaders including Asfandyar Wali Khan and Aftab Ahmed Khan Sherpao to share information,” said Qaiser while talking to the media after the meeting.

The assembly speaker invited Rehman to be part of the joint efforts and the latter assured his party’s support. Rehman said, “JUI-F wants to take the matter beyond politics as it is crucial to the province.”

The JUI-F chief expressed his reservations over the western alignment of the corridor being turned into a road. He stressed there was a marked difference between a road and an economic corridor.

A matter of CPEC and priorities: Extreme steps threatened if western corridor neglected

“It is unclear whether $40 billion would be spent by China or be provided by the Asian Development Bank,” he pointed out. Jan added his party would call a meeting of all parliamentarians in Islamabad in a week to discuss the CPEC issue and K-P’s rights connected with it.