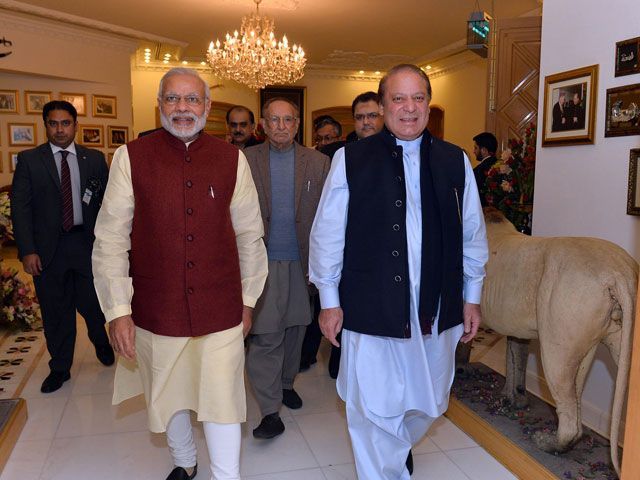 Beyond a jibe from hardline Hindu leader Pravin Togadia – who hoped that Narendra Modi would turn his attention to Dawood Ibrahim and Hafiz Saeed once he was done hugging Nawaz – India has reacted positively to the rapprochement expecting it would set the tone for New Delhi’s foreign policy in 2016.

True, the Congress party has been vehement in wanting to know what has changed in the relationship to warrant the sudden warmth. But it is isolated. Almost all opposition parties have cautiously welcomed the new era in India-Pakistan relations, especially the effect it will have on the border states like Kashmir, Rajasthan and Gujarat.

Surprisingly it is only now, when the weight is somewhat less, when one realises how much Pakistan factors in India’s foreign policy.

The Bharatiya Janata Party (BJP) leaders are now talking in terms of a confederation of south Asia to lend the region more heft and weight in the international arena. Moves made by chief ministers like Amrinder Singh of Punjab in fostering business and economic ties with Pakistan’s Punjab province are now beginning to do the rounds.

The new spirit of cooperation and partnership is being echoed in various chambers. “Aab-o-hawa badal gai hai” (the climate has changed) said a former foreign secretary.

The new spirit has imbued ties with other neighbours. While in Kabul to inaugurate Afghanistan’s new Parliament, Prime Minister Modi announced that India was not in competition with Pakistan in Afghanistan.

Instead, India seems to have hit the nerve that is hurting all neighbours as well as India itself – the activities of Daesh that is a source of deep domestic and international concern. This has leveraged India into taking proactive steps on Pakistan as well as Afghanistan.

But it wasn’t all plain sailing.

Owing to dozens of border violations – where Indian and Pakistani troops traded fire – ties were fraught. However, after a July meeting on the sidelines of the Shanghai Cooperation Organisation meeting in the Russian city of Ufa, things started looking up.

Just a month later, however, talks between the respective national security advisers in New Delhi were called off at the last minute after falling prey to traditional pitfalls.

Though border guards on both sides of the working boundary held talks to get a handle on the cross-border violations, things only got worse. In October the right wing Shiv Sena first tried to disrupt a book launch by former foreign minister Khurshid Kasuri. Then they forced the Indian cricket board to call of talks with the chief of Pakistan’s cricket board – the two neighbours eneded up without playing a bilateral cricketing series.

With hostilities mounting, there was a sudden spark.

Nawaz and Modi had a brief chat on the sidelines of the climate change summit in Paris on November 30. That was quickly followed up by talks between their NSAs in Bangkok on December 6. Days later, Indian External Affairs Minister Sushma Swaraj landed in Islamabad on December 9 to attend the Heart of Asia conference. Following a meeting with her counterpart, the talks process was revived under the ‘Comprehensive Bilateral Dialogue’ to discuss all outstanding issues including Kashmir.

But the best was saved for the last with Modi making a brief stop in Lahore on Christmas day while on his way back from Afghanistan – the first by an Indian prime minister in over a decade.

Ties which had ebbed for much of 2015, started flowing towards the end. With foreign secretaries of Pakistan and India to kick off the year with a bilateral meeting and Modi’s official trip to Pakistan scheduled for later in 2016, the incoming year looks like a year of great optimism, especially in India-Pakistan relations.