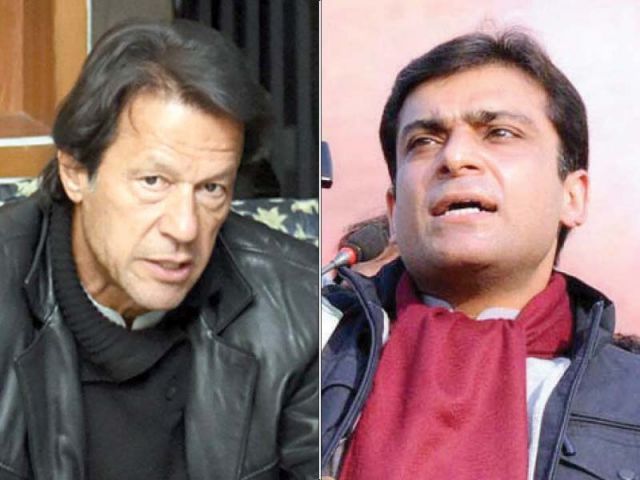 Lodhran will be heading to by-polls tomorrow (December 23) after an election tribunal had annulled the results of the 2013 general election in NA-154 in August 2015, disqualifying PML-N’s Siddique Baloch for possessing fake academic credentials. Both parties held competing rallies in the city on Monday.

PTI, who are fielding the party’s general secretary  stituency, are wary of their performance in the recently concluded local government elections in the area.

“Local government elections are always won by the ruling party,” said PTI chairman Imran Khan at a rally in Lodhran on Monday evening.  “In the local government polls, we were not up against the PML-N but the bureaucracy.”

He went on to add that he would not drop his complaint against electoral rigging and demanded an impartial election commission. “Rigging elections is a crime. No one has the right to take away power from the voters.”

Earlier, PML-N’s Hamza accused Imran of insulting parliament and the election authority from atop a container.

Grandstanding: Imran is no friend of the people: Hamza

“After the conclusion of all three phases of local government elections and by-polls in NA-122, the people have once again chosen the PML-N. Our stance on rigging has been vindicated,” he proclaimed.

Hamza, who was leading a rally in favour of Baloch’s campaign, took a pot shot at the PTI chief, saying if it was left to the Mianwali native, an office for the Taliban would be established in the city.

The PML-N hailed the Rangers’ operation in Karachi, noting that it had restored the confidence of residents of the megalopolis.

He also criticised Imran for seeking help from the court against the government’s package for farmers.

Responding to Hamza’s allegations, who had spoken earlier in the day, regarding the Kissan package, Imran said that the government was squandering public money.

“In Pakistan children are forced to work. Most people lack health facilities and many have no homes but the government is wasting resources on projects like Orange Line Metro Train,” he said.