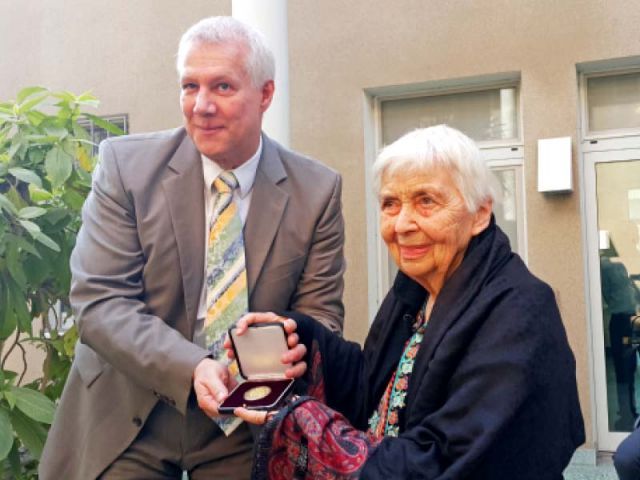 KARACHI: Founder of the National Leprosy Control Programme in Pakistan, Dr Ruth Pfau, was awarded the Staufer Medal at the German consulate on Monday.

“When I came to Pakistan no one recognised me but then people started to appreciate my work across the country,” said Dr Pfau of the Marie Adelaide Leprosy Centre. “I have worked hard with my team to eradicate leprosy in Pakistan, our hard work could not completely eliminate this disease but at least we managed to decrease it,” she said. “This award is not just for me but for all of my teammates,” Dr Pfau added.

Dr Pfau has been living in Pakistan since 1960. When she witnessed the suffering of the country’s leprosy patients she decided to stay here. She is a German nun and a member of the Society of Daughters of the Heart of Mary, who has devoted the last 50 years of her life to fighting leprosy in Pakistan. She has travelled to various parts of Pakistan to medically facilitate leprosy patients, a journey she said enjoyed tremendously because of the marked difference made in the lives of her patients.

With her efforts, in 1996, the World Health Organisation declared Pakistan one of the first countries in Asia to have controlled leprosy. She was also awarded the Hilal-e-Pakistan in 1989 and Hilal-e-Imtiaz in 1979 by the government of Pakistan. Dr Pfau was also on the front line when Sindh was hit by floods in 2010.

Schmiedchen while appreciating her efforts said, “Dr Pfau has been collecting funds in Germany for Pakistan and has told the people of Germany that Pakistan is not full of miseries, the people of Pakistan are full of hope, commitment and cooperation”.

“We usually give silver medals but for her we have given her a gold medal,” he added. We want more Dr Ruth Pfaus in this world, people from both the countries should work for the betterment of humanity, Schmiedchen added. “We would welcome anyone like her from Pakistan in Germany,” he assured.

Political bias? Opposition to take up motion against speaker