Arabic fastest-growing language in US: analysts

Arabic fastest-growing language in US: analysts 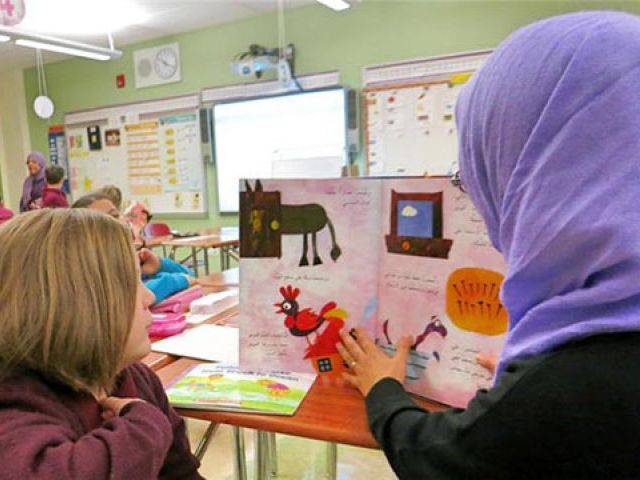 Arabic is now the fastest-growing language in the United States with over one million speakers across the nation, according to analysts.

Despite the language being spoken less than English, Spanish, Chinese or even Tagalog, the country saw a rise of 252,000 speakers from 2010 to 2014, according to census data.

US county closes schools after uproar over Arabic calligraphy homework

According to the Modern Language Association, the number of students enrolled in Arabic college courses tripled to more than 32,000 from 2002 to 2013. The language is also increasingly being taught in kindergartens and colleges across the country.

Analysts point to a spotlight on the Middle East after the 9/11 attacks, for the rise in the number of people wanting to learn the language and the Arabic culture.

“Some people study Arabic for professional reasons or to get a government job, but most are the true Americans who are open to other cultures,” Mahmoud al-Batal, a Lebanese-American Arabic professor at the University of Texas at Austin said.

Despite Republican front-runner Donald Trump’s anti-Muslim rhetoric, many are not convinced by his remarks and want to understand the culture themselves. “They are not convinced by what Donald Trump tells them or by the two-minute media reports of car bomb explosions they see on the news. They want to understand the culture and language for themselves,” Al-Batal said.

He added that college enrollments slumped slightly after US forces withdrew from Iraq in 2011 and study trips for Americans, to areas like Syria and Egypt, became riskier following the chaos around the Arab Spring.

However, despite the figures an Algerian-American expert in Arabic teaching, Mouna Mana, doubts the numbers and said US census data counts few undocumented Hispanics, whereby Spanish could be a faster growing language.

Nevertheless, Arabic made gains despite widely-reported hostility towards Islam, the Middle East and its people.

State of emergency declared in San Bernardino after shooting

Further, an Arabic professor, Kristen Brustad, said Muslim bashing by Trump as well as the San Bernardino attack which left 14 people dead, could hurt Arabic learning in the not so distant future.