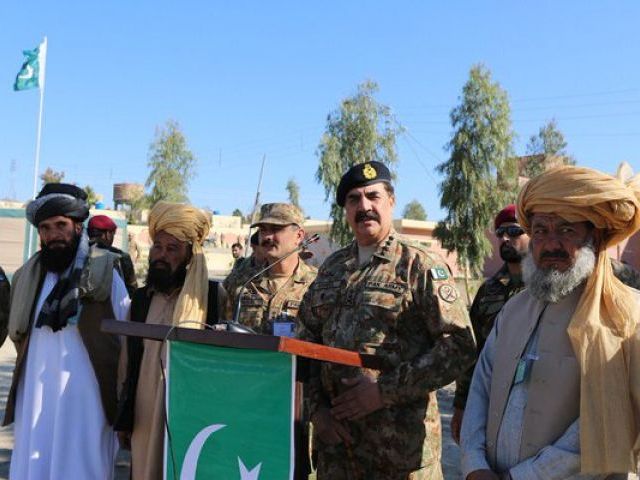 COAS Raheel Shareef visited NWA where he interacted with the tribal leaders and IDPs on December 19, 2015. PHOTO: ISPR

Chief of Army Staff General Raheel Sharif has been told that 38% of internally displaced persons (IDPs) have so far returned to their homes, according to an Inter-Services Public Relations (ISPR) statement.

During a visit to North Waziristan Agency on Saturday, the COAS was briefed about the ongoing operation in the area and return of IDPs. While interacting with the local tribal leaders and IDPs, the army chief assured them of the army’s presence in the area until the completion of the resettlement process.

The army chief said terror networks and linkages are being unearthed across the country to bring the enduring peace at all costs.

Appreciating the progress of Operation Zarb-e-Azb, the army chief reiterated the army’s resolve to continue the operation until the total elimination of terrorists, the statement added.

Ahead of US visit: Army chief says nuclear security a sacred responsibility

Addressing the troops stationed in North Waziristan, the army chief commended all officers for their courage and spirit of sacrifice in the war against terror.

The army chief also inaugurated a 110-bed hospital with state of the art equipment in the Mir Ali area.

Further, in a bid to raise education standards and help Fata residents take benefit from emerging socio-economic opportunities, the army chief announced the construction of a cadet college in North Waziristan.