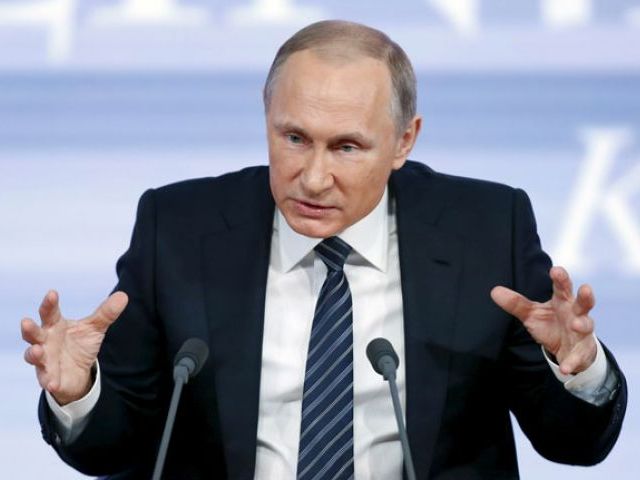 “He is a very flamboyant man, very talented, no doubt about that… He is an absolute leader of the presidential race, as we see it today. He says that he wants to move to another level of relations, to a deeper level of relations with Russia. How can we not welcome that? Of course we welcome it,” Putin told reporters.

‘Will not agree to outside force deciding who rules Syria’

Earlier on Thursday, Putin said he would never agree to any outside force deciding on who should rule Syria and added that there was no way to resolve the Syria crisis other than a political solution.

Putin also said Moscow supported in general Washington’s initiative to prepare a resolution in the UN Security Council on Syria, adding the draft resolution was acceptable as a whole.

He said that Russia supported a US-backed draft resolution aimed at ramping up sanctions against the Islamic State group and cutting off its revenue flows.

“We support an initiative by the United States including on the preparation of a UN Security Council resolution on Syria,” Putin told an annual news conference, adding he had discussed the draft resolution with US Secretary of State John Kerry earlier this week.

“On the whole it suits us,” he told reporters. “We believe that on the whole it’s an acceptable proposal although some things still need to be worked out.”

He added that he believed the Syrian authorities would also accept the draft resolution urging both sides to compromise.

“Concessions should be done on both sides,” he said, stressing Russia’s readiness to help settle the crisis.

He urged joint work on Syria’s new constitution, adding a “transparent” mechanism was needed that will help Syrians conduct democratic elections and elect a leader.

Putin on Tuesday hosted Kerry for high-stakes talks, with the two agreeing to plough on with efforts to halt Syria’s four-year civil war and hold a fresh round of international crisis talks in New York on Friday.

US Treasury Secretary Jacob Lew will lead the 15-member council for the vote that comes amid a major diplomatic push to end the war in Syria.

Putin reiterated on Thursday that Russian forces in Syria have been providing air support to some of the armed opposition groups that are fighting the Islamic State group.

He said that Russia had “found contacts” with people among the “armed, uncompromising” opposition in Syria.

“We support their efforts in fighting ISIL with Russian air strikes,” he said, referring to the Islamic State group.

He did not say what rebel groups he was referring to.

Syria’s rebel forces have regularly rejected the possibility of cooperating with the regime or Russia and there has been no evidence of such cooperation, though the Russian military has claimed that some bombing runs use coordinates received from opposition members.

Russia has been carrying out air strikes in the war-ravaged nation at the request of President Bashar al-Assad since the end of September, while a US-led coalition is conducting its own campaign targeting the Islamic State group.

Putin refused to put a timeframe on the Syrian campaign.