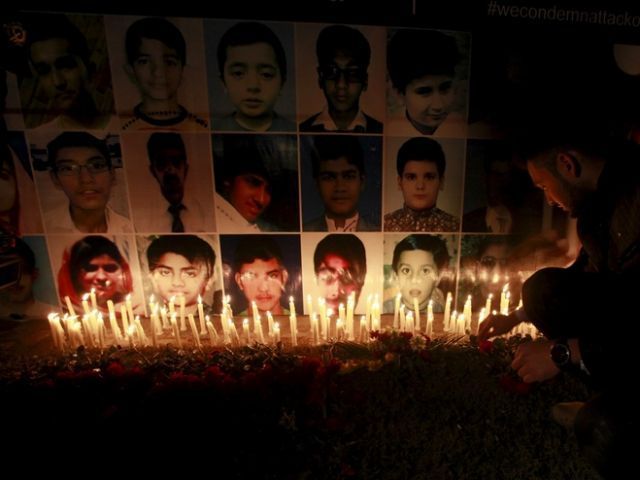 A man places a rose after lighting candles in front of portraits of the victims of the Taliban attack on the Army Public School in Peshawar, during a candlelight vigil in Lahore in this December 19, 2014 file photo. PHOTO: REUTERS

LAHORE: The City District Government Lahore (CDGL) will observe a minute’s silence to honour Army Public School (APS) victims at 10am on Wednesday (today). Traffic on all major city roads will stop for a minute to mark the first anniversary of December 16 attack.

The announcement was made by DCO Capt (r) Muhammad Usman while participating in a rally at The Mall. A large number of people from all walks of life participated in the rally, including representatives of civil society, government officials, athletes, artists, parents and children. The rally started from Quaid-i-Azam Library and ended at Charring Cross. A documentary film was screened to pay tribute to the December 16 victims.

Usman said that the nation was united against terrorism. “The terrorists killed our children. We are committed now to never allow such incidents to happen again,” he said.

“The national anthem will be aired from Radio Pakistan and FM radio stations. Citizens should come out of their houses and express solidarity with the nation,” he said.

DIG Haider Ashraf said that police would remain on high alert. “Police have already started search operations in the city,” he said.