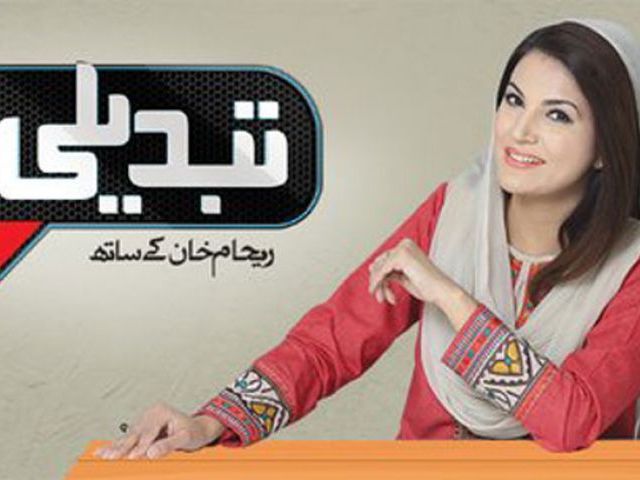 Reham Khan is back and she isn’t pulling any punches when it comes to the promotion of her new show. Believe it or not, the PTI chairman’s former wife has co-opted the party’s famous slogan: Tabdeeli aa nahi rahi, tabdeeli agayi hai.

You got that right. We have heard cricketer-turned-politician Imran Khan scream ‘tabdeeli agayi hai’ from atop containers and stages numerous times over the past two years, but Reham’s new show promises to bring ‘real change’. How exactly she aims to bring this change is anyone’s guess.

Reham has been using the hashtag #tabdeeli on Twitter to promote her upcoming show, and let’s just say not everyone is happy about her hijacking their beloved leader’s slogan.

When a fan tweeted, “I hope that the programme ‘tabdeeli’ will bring a positive tabdeeli in our society,” Reham replied with, “That’s my intention.”

Many took to Twitter to express their excitement for the upcoming show:

@RehamKhan1 will maintain stndrd of Journlism in hr nw prgrm Tabdeeli,it wil be a shutup cal of all false allegation pic.twitter.com/yoA1Gnrdow

While some couldn’t get over the interesting choice of name for her new show:

It couldn't have been better than this:) the name of Reham Khan's upcoming show is " Tabdeeli"

Also Reham Khan is back on TV with show named 'Tabdeeli' Lololol.

She named her show 'tabdeeli' only to mock IK? https://t.co/FTNtWikaQr

Use ur mind @RehamKhan1. Tabdeeli is not ur concern.We r enough 2 support Tabdeeli/ #IK .don't indulge urself in it. #تبدیلی_یا_بغض_عمران

If the flooding of University road wasn't enough, now Reham Khan is set to host a show called ' tabdeeli' #JustPakistanthings

Just be glad Reham named her show Tabdeeli and not Insaf.

Am all for freedom of expression but Reham Khan naming her comeback show Tabdeeli- is Stretching it a bit too far.

Tabdeeli Reham Khan k sath and Naya Pakistan with Talat Hussain These ppl should be atleast thankful to PTI :) https://t.co/ixQPgpqyb7

So Reham Khan's show name is Tabdeeli. Rumours of a 5 million salary. That too paid by govt.

really? the name of Reham's new show is Tabdeeli? ?? oh dear God, this is going to be torture