The burst pipeli­ne has brough­t about a shortf­all of 70 MGD of water in the city
By Mudaser Kazi / Photo : Athar Khan
Published: December 14, 2015
Tweet Email 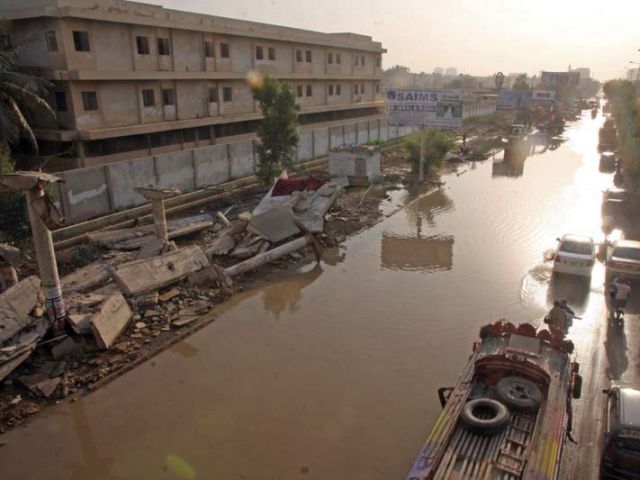 University Road was inundated on Saturday evening when a water supply line measuring 84 inches in diameter burst near the Federal Urdu University of Arts, Science and Technology. PHOTO: ATHAR KHAN/EXPRESS

KARACHI: Residents of Clifton, Defence Housing Authority (DHA), Mehmoodabad, Jamshed Town, Lyari, Keamari and their adoining areas should brace themselves for water shortage as the pipeline that burst on Saturday has brought about a shortfall of 70 million gallons per day (MGD) of water in the city.

Karachi has a total water supply of 550 MGD. University Road, one of the city’s main thoroughfares, was inundated on Saturday evening when a water supply line measuring 84 inches in diameter burst near the Federal Urdu University of Arts, Science and Technology. The situation took a turn for the worse when a valve was damaged by a dumper of the Karachi Metropolitan Corporation (KMC) that hit it while clearing the passage for the water stream from the burst pipeline.The road witnessed a severe traffic jam as a consequence.

The valve was repaired on Sunday evening, after which the road would be cleared of water in a few hours, claimed the KWSB officials.

According to Zardari, one of the three Greater Karachi Lines (GKL) burst at 5pm, carrying 50 MGD of water to the Central Ordinance Depot (COD) for filtration and further distribution to the different areas of Karachi. The other two lines also carry 50 MGD each. The areas affected by the suspension of the burst line are Clifton, DHA, Mehmoodabad, Jamshed Town, Lyari, Keamari and their adjacent areas.

“The pipeline was 84 inches in diameter and was carrying 50 MGD of water,” said Zardari. “But the shortfall is up to 70 MGD because we have decreased the flow in the other two pipelines [as well].”

According to Zardari, who has been stationed at the site since the incident, the recession of water is the major issue they are currently facing. “We cannot start the repair work until the water recedes from the pipeline and we have installed five submersible pumps on site for the purpose,” he said. “The water coming out is also being drained in the nearby nullah.”

Pakistan could become region’s most water-stressed country by 2040: report

Zardari told The Express Tribune that work was in progress on the pipeline after they received complaints of water leakage when it burst. According to him, the pipeline was installed in 1958 as part of the GKL project, from Keenjhar Lake to COD in Karachi. The pre-stress concrete (PSC) pipeline starts from Samama, opposite Safari Park on main University Road and goes on to COD. The pumps have been closed at Dhabeji pumping station, he said, adding that the gate has also been closed near Samama to stop the water flow in the damaged line.

Zardari further said that the situation is under control and all necessary measures have been taken to repair the damaged pipeline.

Speakers discuss the ways to ensure safety on social media